Economic data shows unemployment is down 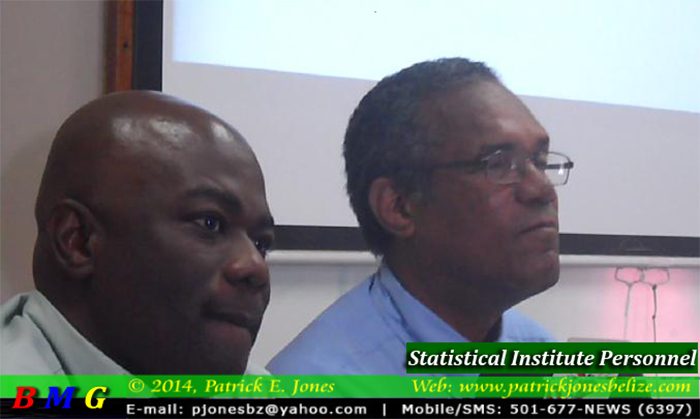 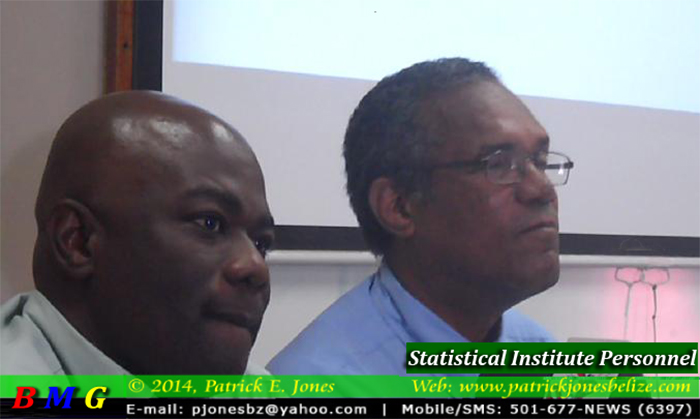 AARON HUMES Reporting: The Statistical Institute of Belize is responsible for the collection and presentation of up-to-date economic and social data for the country. Today they released a veritable avalanche of it – the consumer price index (CPI), which measures year to year changes in prices and inflation; the trade balance and how much Belize sells, and to whom; and finally the Labour Force survey, measuring the unemployment rate and who is working and where. 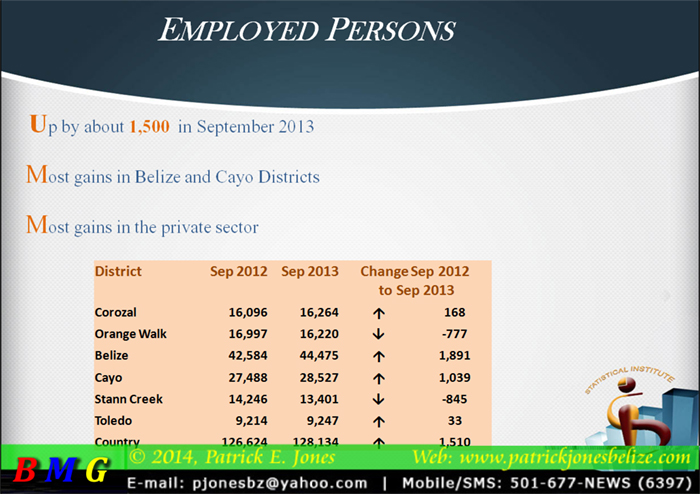 Belize’s official unemployment rate is now 14.2%, down nearly two points from the all-time high of 16.1%. The figure comes from the twice-yearly Labour Force Survey carried out in September 2013. SIB Deputy Director-General Dr. Leopold Perriott said that from 2012 to 2013, there are 3 unemployed women for every two unemployed men; percentages stand at  21.5% for females and males 9.6%. The total labour force – all persons of working age, that is, 14 years of age and older, and who are not students, housewives, retired or disabled persons is over 149,000, of Belize’s total estimated population of 351,600, and 128,000 of these are employed – that is, they work for themselves, for others, or even just “ketch and kill.” 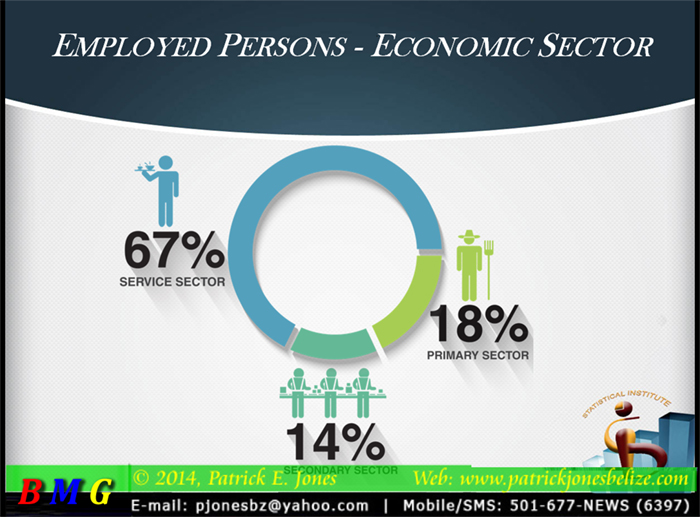 Employment rates in the towns and cities are similar to the rural areas, and unemployment is highest in Cayo District at 16.7%, and lowest in the Orange Walk District at 11.8%. In comparison with 2012, only Stann Creek District saw a slight rise to 15.1% from 14.9%. Orange Walk and Stann Creek, home to major industries, lost 1,500 jobs between them from 2012 to 2013, but increases in the Belize and Cayo Districts made up for it.

Two-thirds of all Belizeans work in the service sector, which covers skilled jobs; another 18% are in the primary sector as farmers and fishers, and 14% work in construction or manufacturing. Some 27% are self-employed, but twice as many – 58% work in the private sector. The Government employs just 11.6% of all Belizeans.

Dr. Perriott says that the Institute’s survey, which it will next conduct in April of this year, does cover seasonal shifts such as the annual influx of graduates into the workforce and employment in the sugar, citrus and banana industries. But according to SIB Director General Glenn Avilez, they do not expect to provide a more closely assessed level of data, say from month to month, in the near future.

Youths aged 14-24 account for 25% of the unemployment rate, but that figure is cut in half for the age bracket above them, 25-34. The numbers dip from there to about 10% of persons over the age of 55. 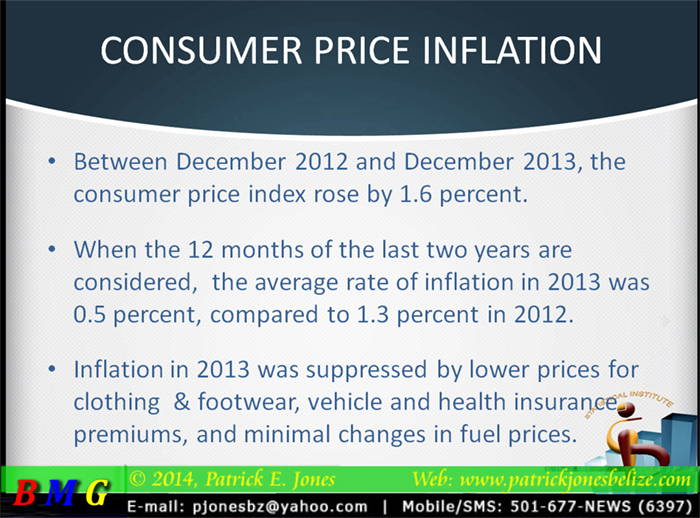 Turning to the CPI, as most can tell you, prices have gone up, but not by as much as one might think. The SIB researched 260 products in all the municipalities except for Benque and San Pedro, and found that on average Belizeans are paying just over a cent more for basic goods.

Going inside the numbers, Belizeans are paying, on average, about 1.5% more for food staples like ground beef, red kidney beans, eggs, milk, and vegetables. We are paying less for alcohol and cigarettes, clothing and footwear, house furnishings, recreation, but about the same for housing and utilities, communication and transport. Other sectors have gone down. Gas and fuel has stabilized somewhat and butane is actually down on average from year to year.

National inflation is at 0.5% measured on average for the year, with Belmopan having the highest average inflation at 1.4% while there was no change in Dangriga. Belize is also performing well in terms of inflation along with its Caribbean and Central American counterparts, recording lower numbers similar to Canad

a and the United States which have far more consumers and buy more than we do. 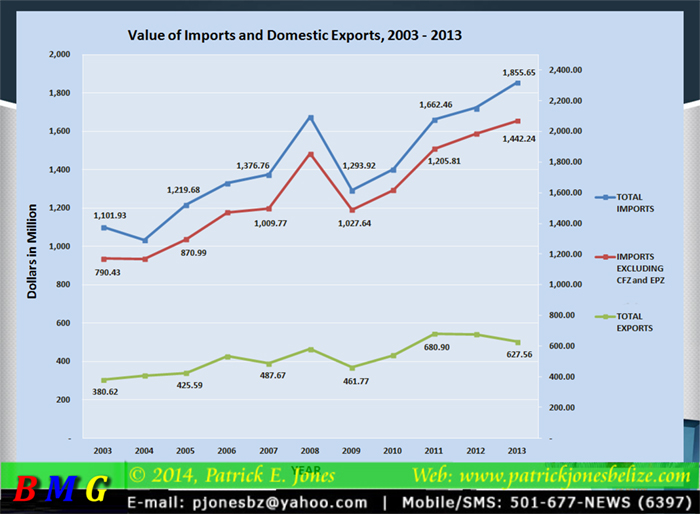 And in terms of Belize’s international trade balance, Belize is also buying a lot more, while selling a lot less. The country bought over $1.8 billion in goods in 2013, mostly from the U.S., E.U., Caricom and Mexico in that order, while last year we sold over $627 million, mostly to those export partners as well as to the People’s Republic of China. This is the widest the gap has ever been. We are buying more machinery and transport equipment – $51 million, and manufactured goods – $55 million, and selling less petroleum and citrus and bananas, a total loss of over $90 million, which has caused the EU to bump the U.S. as Belize’s No. 1 export partner. Sugar has flatlined at $107 million despite more cane on the ground, and fishing/shrimp production and animal feed are picking up, but not enough to fill the gap.

This is the first in a series of regular press conferences and informational briefings organized by the Institute, which was separated from Government in 2007, in an effort to become more media-friendly and gain greater exposure. It will meet regularly with the press and release key statistics on the last Wednesday of every month. For more go to their website, www.statisticsbelize.org.bz.