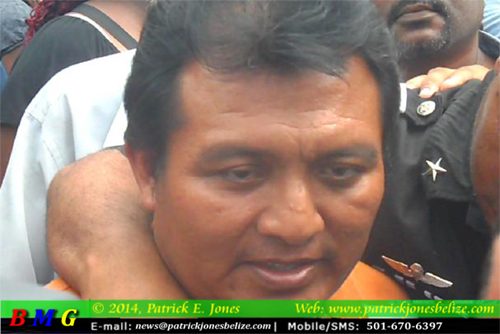 His conviction by Chief Magistrate Ann-Marie Smith on Monday sparked outrage among the population and particularly in the Police Department, where he is respected by all his peers.

It was a case of “people power” versus the-powers-that-be in Belize City this morning, as over 100 vocal supporters of the Corporal gathered in front of the Court loudly chanting “Free Peck Now!” and similar chants while waiting over two hours for the case to be called. Inside the courtroom, it was standing room only as the Chief Magistrate heard pleas for mitigation from three prominent Belizeans: Police Commissioner Allen Whylie, retired minister of the Church of the Nazarene Reverend Doctor Oliver Ottley, and chairman of the Belize Bank and Nazarene Church parishioner Lyndon Guiseppi.

The Commissioner echoed his earlier sentiments of Peck as a humble, honest, dedicated and efficient police officer over the 20-plus years he had known him and said that the level of respect for Peck was evidenced by today’s show of support from the public and from his Police comrades in preceding days.

Reverend Ottley called Peck a man of integrity and insisted that the man he knows as a parishioner would not deliberately, if inadvertently, do anything contrary to the law which he represents.

And Guiseppi, a fellow parishioner of Peck at King’s Park Church of the Nazarene, said if that he were to judge’s Peck character from the five years he had known him, he would see a regular church goer, an example for his family and community, and a man he would go into a battle with, that he could trust. Peck’s attorney, Senior Counsel Simeon Sampson tried and failed to get the Chief Magistrate to suspend the stipulated sentence of two to five years for unlicensed ammunition under the Firearms (Amendment) Act and three to seven years for keeping prohibited ammunition, pending appeal.

The turning point of the case came after a short adjournment when according to Sampson, Director of Public Prosecutions Cheryl-Lynn Vidal presented him with Section 54 of the Summary Jurisdiction (Procedure) Act, which is Chapter 99 of the Laws of Belize. In summary, it applies to any summary conviction offence for which imprisonment is mandatory, and allows the court to impose a fine of no more than 250 dollars, and no amount in any case that would subject Peck to serve a default prison term longer than to which he is liable under Chapter 99 or the amended Firearms Act.

We note that this statute, to our knowledge, is rarely used, and some believe a precedent may be set by its use here. But whatever the reason, Corporal Peck is free, and mobbed by his supporters, he gave thanks and attributed his freedom to always living for the law. He has not made a decision on whether he will continue as a police officer and for now he will spend time with his family. Peck and his wife Loretta were then driven away in separate vehicles by their supporters. Police Commissioner Whylie told reporters that he will review the matter and decide at a later time how to proceed with Peck’s status in the Department, including possible disciplinary charges.

Sampson indicated the matter will be appealed and added that a constitutional motion arguing against the mandatory sentences stipulated in the Firearms (Amendment) Act will be filed in due course, which was his reason for arguing for the suspended sentence.

And while that is the official story, the enduring memories of this Friday will be the clash between “people power” and the powers-that-be.

Citizens Organized for Liberty through Action (COLA) led a crowd of approximately 200 vocal protesters outside the Magistrate’s Court in a show that has not been seen since the Chinese community came out in numbers to the court in 2011.

After the sentencing hearing COLA President Giovanni Brackett told us that today’s result is testament to the power of the people.

Activist Russell Roberts said he hopes similar cases will be reviewed, while Delroy Herrera supports the decision to challenge the law in court and hopes a similar challenge will be raised in the National Assembly. A new organization, Fighting in the Streets Together (FIST), made its first appearance alongside COLA in today’s protest.