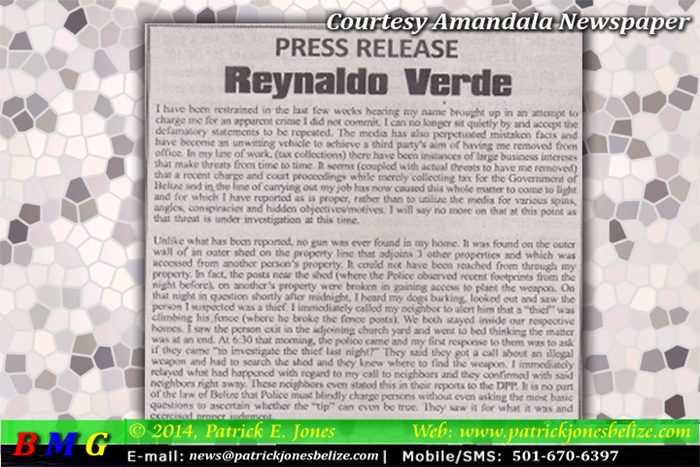 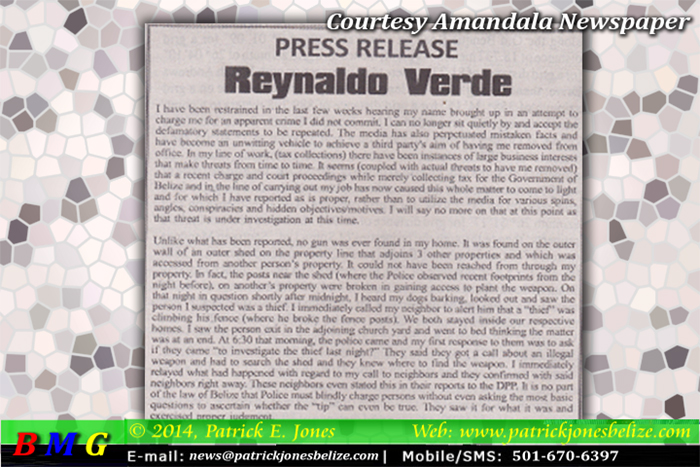 AARON HUMES Reporting: In this week’s editions of two leading newspapers, Amandala and Reporter, there appeared a press release from Reynaldo Verde, the General Sales Tax (GST) Department supervisor who has been vilified by activists peeved by his apparent release from Police custody following the discovery of a firearm at his premises, after he explained to them that the gun was not his. Some wondered if Verde was being given special treatment but in his release he maintains that the Police who visited his home around 6:30 a.m. on January 3 were simply, in his words, exercising proper judgment by investigating his claim after he informed them of what had transpired earlier in the night.

But before we get to his version of events, in the opening paragraph Verde asserts that he has been “restrained” in the past few weeks as the charges against him have been repeated – but no more, as he maintains that the statements made against him are “defamatory” and accuses the local press of perpetuating mistaken facts and becoming an unwitting vehicle in a third party’s aim of having him removed from office. You heard right – it’s all a conspiracy! And as proof, Verde asserts that in his line of work, certain “large business interests” have made threats against the Department from time to time, and he knows of specific threats against him personally which he has reported and which are under investigation. The allegations against him, he says, are part and parcel of that conspiracy.

Now to what really happened. Verde says he was at home when just after midnight, he heard his dogs barking and upon going to investigate saw an unidentified individual in the area. Suspecting attempted theft at his neighbour’s property, he called that individual to inform him and upon seeing the person leave through the adjoining church yard, went to bed. The gun was later found on the outside wall of a shed on the property line which adjoins three other properties, but he insists the person did not come through his yard, but someone else, and broke the fence posts in doing so. According to Verde, when police arrived, he asked if they were there in response to the thief, and that was when he was told that they had information about an illegal weapon and asked to search his shed. Verde says this is when he told them what had happened and the Police confirmed the report with the adjoining neighbors, who also gave statements that were later sent to the office of Director of Public Prosecutions Cheryl-Lynn Vidal.

In defense of his actions, Verde says that no policeman should proceed to blindly charge an individual without asking the basic questions related to the incident. He adds that because he has been in trouble for gun-related incidents before – mentioning a previous case that ended in acquittal but no the 2013 San Pedro incident where charges were reduced due to medical findings and then the chief witness declined to pursue the case – he chose not to do more because he feared arrest. He says, “I, like all law abiding citizens with licensed weapons, are restrained while the real criminals do far worse without a license at all. This is one clear example where a criminal with a weapon to plant, got away “scotfree” because I felt restrained.” According to Verde, he agrees with the call to change the gun laws in the wake of the Gino Peck case and cites his own lengthy time in Government service – 23 years – and work on behalf of public officers as Chair of the Public Service Union for the Belize District. He closes with a pledge to continue supporting the authorities and a warning that he has legal representation and legal proceedings for slander and defamation will be visited on the next person who chooses to go after him.