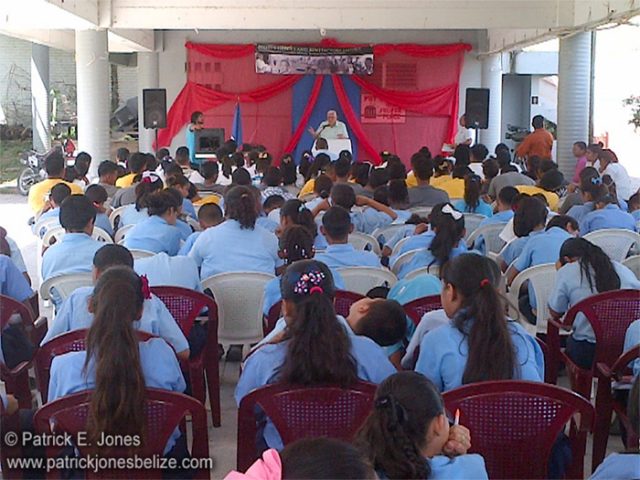 ORANGE WALK BUREAU Reporting: The annual Heroes and Benefactors Exhibit is underway at the Banquitas House of Culture in Orange Walk town.

Organizers say the event is designed to provide educational insight into the rich history of Belize, particularly as it relates to our founding fathers and ancestors.

Primary and Secondary Schools from the Orange Walk district today joined in on the educational tour. Fred Hunter checks out the exhibit

Guest speaker at the launch of the exhibit was former government minister Fred Hunter who did his part to share some history with the next generation of Belizeans.

But while the students got a lesson on Belize’s much cherished roots, inside the Banquitas House of Culture, was an exhibition with a wealth of knowledge.

Director of the National Institute of Culture and History Nigel Encalada says two national heroes were added to this year’s exhibit, those being Trade Unionist Clifford Betson and Pioneer, Leigh Richardson.

The exhibit coincides with National Heroes and Benefactor’s Day on March 9.  Because the day falls on a Sunday, it will be observed as a public and bank holiday next Monday, March 10.

The exhibit at the Banquitas House of Culture will be open to the public all throughout the month of March. Exhibit at Banquitas House of Culture