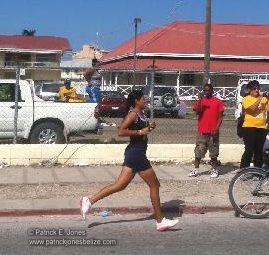 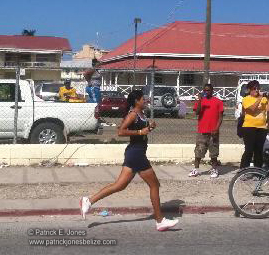 Monday, March 31, 2014. AARON HUMES Reporting: The women of the University of Belize (UB) denied their male counterparts a win on Sunday in the annual battle of the sexes that takes place on the George Price Highway.

The UB Relathon – a portmanteau of relay and marathon – features teams of men and women running in turns from San Ignacio and Belmopan respectively to the finish at the former Belize Technical College compound.

BTC alum Dudley Marshall conceived the idea of the race in 1977 as both a fundraiser and test of mathematical theory.

This year the men were seeking their 19th title while the women were defending their win from last year.

And it was the girls, led by Patricia Chavarria, who won by eighteen minutes, finishing at 2:59 p.m.

The best male individual time was about four minutes and forty-five seconds by George Ortega for a new record, while the girls’ best was Chavarria’s 5 minutes, 43 seconds.

The boys still lead the girls head to head 18 to 16 but the girls are catching up, having won three times in a row.