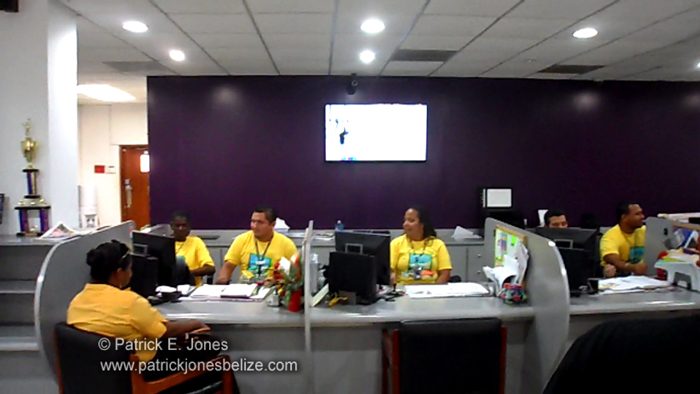 Friday, April 4, 2014. AARON HUMES Reporting: This afternoon in Belize City, there was an unusual protest at the Church Street office of Belize Telemedia Limited (BTL).

Employees of the state-run telephone company are negotiating with management for a 5% raise of pay.

Following negotiations last week, the Belize Communications Workers’ Union (BCWU) met with its members to present a counter offer of 3.5%.

With a transition in executives taking place this week, the employees seized the opportunity to make their concerns known.

At 10 this morning and again at 3 this afternoon, employees observed a one-minute protest in which they knocked their knuckles on their counter-tops, causing a short delay in tending to customers. Our information is that it happened in other BTL offices as well. And while the employees’ protest spoke for them, we gave senior management in the person of Dr. Dionne Chamberlain-Miranda, executive general manager for customer services and public relations, an opportunity to respond.

She explained that negotiations are ongoing and the Executive Committee, having met with the Belize Communications Workers’ Union (BCWU) which represents BTL employees last week Thursday, will now meet with the full BTL board on Tuesday to consider the counter-proposal, and emphasized that economic factors are in play.

According to Miranda, the company has no interest in or plans to punish anyone who took part in today’s protest, and she does not expect that it will hinder the progress of the negotiations.

She emphasized that the company has great respect for its employees and tries its best to treat them well, media opportunities like today’s notwithstanding.

According to Dr. Miranda, she knows of nothing that could have led to “miscommunication” regarding today’s protest and was not aware that the action would go ahead.

Her only regret is that it took place in front of customers and halted, if only briefly, the steady flow of service at the downtown office.

BTL has a fully Belizean staff and has been in Government control since August of 2009.