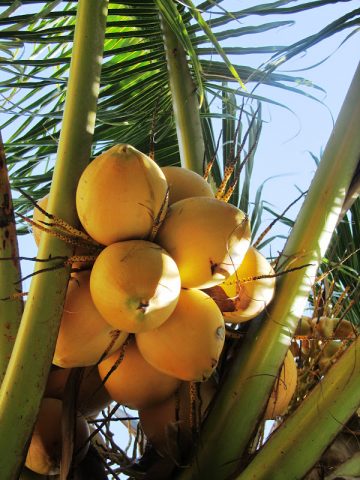 Before this….coconut production in Belize was falling rapidly….especially since a disease called “lethal yellowing” was rapidly disseminating the coconut palms.

The sale of dried coconut was still vibrant, since housewives still used it to make home-made coconut milk for use in baking creole bread and preparing the popular “rice and beans”. A small amount was used in cottage industries to make coconut oil. However, even this was in decline, since importers started to bring coconut milk powder in convenient sachets for a rather inexpensive price….and they also imported large amounts of coconut oil already packed for retail sale. Today, this imported milk powder has almost completely displaced the grating of dried local coconuts. If Big H had not successfully introduced and marketed its coconut water….coconut production in Belize would have continued its decline, and today production would probably be negligible.

The coconut industry now provides direct work and income to an estimated 500 persons throughout Belize, in land preparation and maintenance, planting, harvesting, delivery, processing, distribution and sales. Many of these are now self-employed persons selling out of a pick-up truck on the side of the road or at tourist stops.

To fully meet this domestic demand for coconut products…..Belize would need 120,000 fully productive coconut trees….which at 80 trees per acre would need 1,500 acres of coconuts. Just coconut water alone would need 30,000 trees or 375 acres. Belize already has this population of trees, but scattered across large distances, including offshore islands, that makes the majority of the current production a challenge for commercial profit making.

A proper structuring of the coconut industry production chain for optimal productivity….and design of a fertile investment environment…would double the domestic demand within five years….increasing the number of direct workers and income earners in this industry to around 1,300.

A fully productive coconut tree should not be harvested for more than 8 coconuts per month on average. This way it will provide that average consistently every month for many years….and income is continuous and predictable. If a tree is raped of all its nuts at once, it gets ‘shocked’ and production and income becomes erratic and unpredictable. A tree harvested sustainably will yield a much more bountiful harvest over its life time.

The current breakeven for coconut production destined for coconut water is seven (7) acres. This assumes the investor already owns the land, and that the investment includes financing, land preparation, planting, maintenance, harvesting and delivery within one hour radius from factory. Cluster production within a defined radius from the factory is essential to efficient and effective profit making from coconut investment.

Big H was able to do this successfully because it had invested previously in building a credible brand that was highly recognized and valued by a wide range of consumers, it had invested in the processing facilities, in trained production, administration and sales/marketing staff, the distribution channel capacity and capability, the large network of repeat customers and many thousands of loyal consumers. This is what allowed them to ask consumers to pay $2/500ml product….and this is the principal reason why the industry has been growing sustainably….because profitability was built into the price from the get go, for every level of the production chain. Had this product-market strategy not been successfully implemented, the industry would have remained in decline. Only Big H was in the position to be capable of being successful at this. There is even room for asking consumers for more, because a much larger volume of Gatorade is sold for $3/500ml….and that is not nearly as healthy and natural as coconut water.

Big H has done well for Belize….the creativity of the man’s mind has proven more effective than the many millions government has spent on “diversification” projects….because it has achieved much more that can be seen, touched and valued. It can do much more than citrus and coconut water….for passion fruit, mango, pineapple, seaweed, lemon grass, dairy milk, among others. No doubt Big H has made its fair share of mistakes….but to crucify a man for his mistakes is preventing the next generations from benefiting from the learning from those mistakes….and is the ultimate example of a society unable to forgive and too ready to destroy. Without the creative mind of Big H at work, there would be no La Ruta Maya Belize River Challenge. Belize Government and relevant financial institutions should make good by Big H….a serious and earnest sit-down should take place to resolve the challenges and create the conditions for a robust forward press. Set free the creative mind of Big H, so that it can do more of its magic for Belize. The amount of value it creates is way far over and above the size of the challenge at hand.

The following recommendations can also help to grow the coconut industry rapidly:

1. Raise the import duty on Gatorade-type drinks that compete directly with coconut water to 100%, and give it the same acknowledgement that is given to soft drinks, beer, rum and cigarettes. The demand for coconut water would more than double, especially if marketing, distribution and sales is ramped up.

2. Impose a Revenue Replacement Duty of 50% on imported coconut water, with the objective of significantly reducing its market-share potential for 15 years, while strengthening the potential for domestic investments for that capital-investment period. Investors would never invest what is required to make a shelf-stable product for export under current conditions, essentially because our government has a lot of precedence where it has altered its fiscal positions rendering domestic production of many products unviable. A typical example is the changes it made in the Customs Tariff Law that destroyed value-adding in packaging of oils and manufacturing of tomato ketchup, BBQ and other tomato-based sauces in Belize. Our governments have to make a clearly articulated break with the past, in order to create the kind of investment climate that will encourage investors to take these kinds of risks in production.

3. Grace Kennedy coconut oil, which dominates the local market, is mostly refined coconut oil imported from Asia and should no longer be accepted as a CARICOM origin product. It should be required to pay 45% import duty, a rate increase which has successful precedence in the development of the pepper sauce industry. Belize spends $500,000 per year on a Directorate of Foreign Trade, which has never presented nor defended a case on Belize’s behalf at Caricom’s Council of Trade and Economic Development (COTED). They should get their feet wet with this one….because there are many more trade treaty battles that Belize will need to fight….to make up for irresponsible persons who went to sign lop-sided treaties that are now working against our best interest.

4. The manufacturer of coconut oil in Belize should be facilitated with all that is required to manufacture coconut milk powder in sachets….with a view to dominating the CARICOM market for this product, which currently comes from Asia!!

5. All efforts should be made to commercialize the coconut husk and shell…..the husk as a renewable source of soil improver and charcoal production….and the shell as a sustainable supply of material for arts and crafts industry and for heating kilns. Special efforts and product-development grants should be offered over a five year period to rapidly commercialize these bi-products…..so that nothing from the coconut industry goes to waste….and so that the resulting high level of productivity through value-adding allows us to compete effectively with countries that have much larger scale of coconut production.

Of long-term importance to the industry is the development of cultivars that are strong and can resist threats of disease, weather, soils and other natural factors….that produce the highest yields….and that produce the best raw material for the destined finished product. Coconut varieties that are ideal for producing coconut water are not the same as those destined for production of coconut oil. We need to develop our genetics and agronomics for coconut production as the basis for our competitiveness and productivity in this crop and the final products that we choose to exploit commercially.