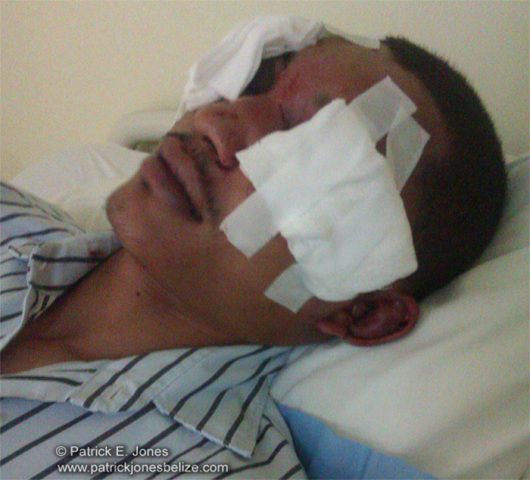 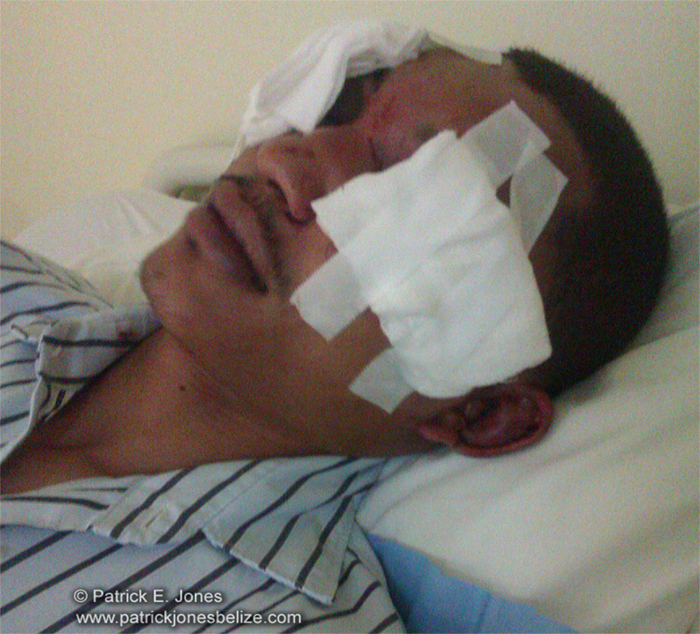 Saturday, May 10, 2014. PATRICK E. JONES Reporting: A San Ignacio man is slowly recuperating after he was viciously attacked and badly beaten.

27 year old Jonathan Chavez sustained serious injuries to his head and face on the morning of Sunday, May 4.

The attack happened on Burns Avenue in San Ignacio town.  In an interview conducted on Saturday afternoon, Chavez said that he was on his way home from work around 4 am on May 4 when he was set upon by a group of three men.

Chavez said that a woman who was with the men who attacked and beat him, did not physically take part in the beat down but only stood by and laughed as he was being beaten.

A surveillance camera from a business establishment on Burns Avenue captured to brutal attack which left Chavez with both eyes swollen, his ear bitten and torn and bruises to other parts of his face.

On Saturday afternoon, Chavez gave an interview in which he recalled the incident.  Here is that interviews and some pictures from the attack. [Please be advised that some of the images are graphic.]

During the attack, Chavez’ cell phone and wallet containing personal items were stolen.  $15 in cash which he had in his pocket was also stolen.

At one point during the attack, Chavez says he was dragged into an area near the Anglican Church where the attack continued.  He was also stripped of his clothes and when police arrived at the scene a short time after, he was found almost nude and transported to the San Ignacio Community Hospital.

When asked, Chavez said in the interview that he knows who his attacker is and he intends to press charges for the attack which has been classified as wounding by the medical doctor.

Police investigation of the incident continues.