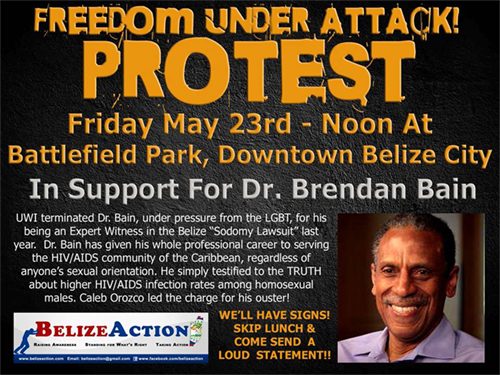 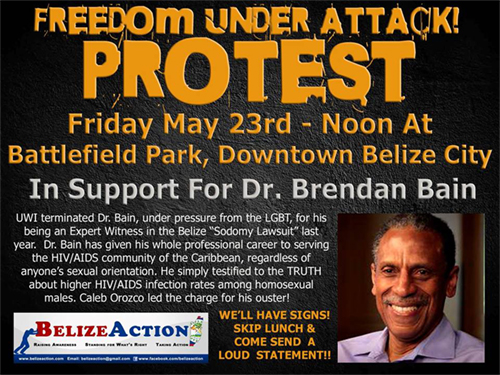 Thursday, May 22, 2014. PATRICK E. JONES Reporting: The group Belize Action, an advocacy group on morality, righteousness and legislation will stage a lunch hour demonstration on Friday afternoon in Belize City.

The demonstration according to the invitation sent out via social media and text message, is calling on supporters to “stand in support for Dr. Brendan Bain” who was terminated this week as head of the regional CHART program at the University of the West Indies.

Professor Bain provided expert testimony last year in the challenge to Section 53 of Belize’s Criminal Code, and because of that testimony he was targeted.

Thirty five regional advocacy groups, including the United Belize Advocacy Movement, UNIBAM, sent a letter to the University of the West Indies notifying the regional institution that they had lost confidence in Professor Bain as the head of CHART.

He was subsequently fired by the UWI.

According to Belize Action: “Dr. Bain laid his whole professional career on the line for us in Belize! Let’s send a loud message to the Caribbean!”

Friday’s noon demonstration will be held at the Battlefield Park in Belize City.