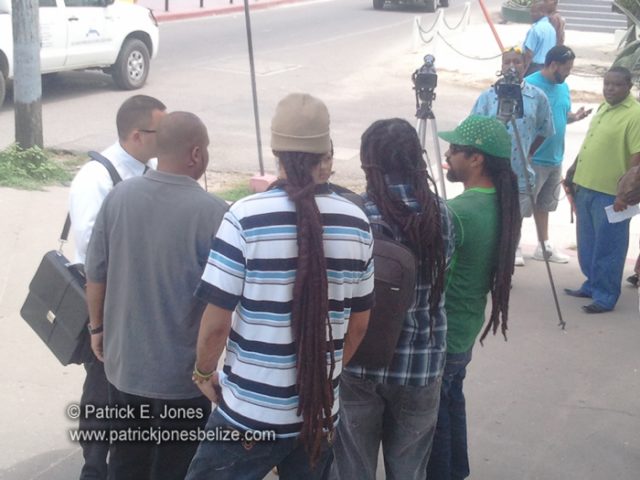 Friday, May 23, 2014. AARON HUMES Reporting: Today the Government of Belize, represented by the Ministry of Natural Resources and Agriculture, formally served an injunction on the Belize Grassroots Youth Empowerment Association (BGYEA), represented by president Nigel Petillo and vice-president David Barnett, stopping them from conducting any activity in the Buffer Zone separating the Harmonyville community at Mile 41 from the George Price Highway, including a plan to plant corn in conjunction with a foreign investor, Sam Patten.

In Belize City this morning, the group’s leaders met with attorneys Kareem Musa and Audrey Matura-Shepherd, who has officially been retained as counsel to get their legal advice. In its wish to remain non-political, Petillo says, they have not retained Musa because of his political connections. Essentially, they have been told that they must and will respect the injunction. We hear more from BGYEA president Petillo, who expressed his frustration with the Government’s apparent micro-managing of their project.

This is pending a court hearing on June 13 where the two sides will hash out their differences. Petillo told reporters today that they will respect the injunction even though they reject the Government’s views.

He says they have been expressly told by Commissioner of Lands Wilbert Vallejos that they are “managers” of the 1,300-acre parcel which includes seeing to it that there are roads in the area, that the zone is cleaned out and maintained, and their project is only intended to benefit the residents and leaseholders of land in the area to help the organization plan the community.

According to Petillo, they recognize the Government’s rights as owners of Crown land, which the Zone represents, but says that does not take away from their rights to manage the area as they see fit.

Petillo says the Commissioner and CEO in the Ministry are trying to find excuses to cover for their inability to take charge in cleaning the buffer zone. Barnett told us that the investor, a Sam Patten, has already cleared the zone and their members raised the money to buy the seeds to plant.

If the initiative goes through, the money would be used in the service of developing the area and especially providing access to the respective properties of owner-members of BGYEA and Harmonyville.

There will be a membership meeting for BGYEA members at the Harmonyville site on Sunday morning May 25 at 9:00 a.m. to discuss the latest developments.

She has advised that there be no activity in the area though there may be work in the non-buffer zone area this weekend, which would not contravene the injunction. In its wish to remain non-political, Petillo says, they have also accepted assistance from Kareem Musa but have not retained him because of his political connections.

Petillo says they must “stand up” to the Government on behalf of their members. The organization has previously advocated for better land distribution and more access for ordinary Belizeans.