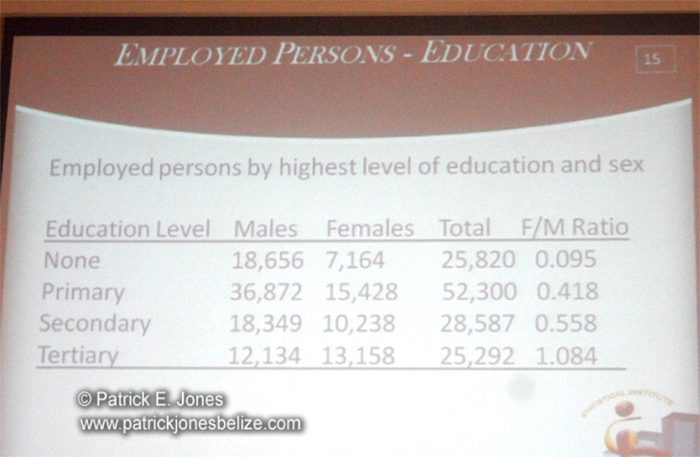 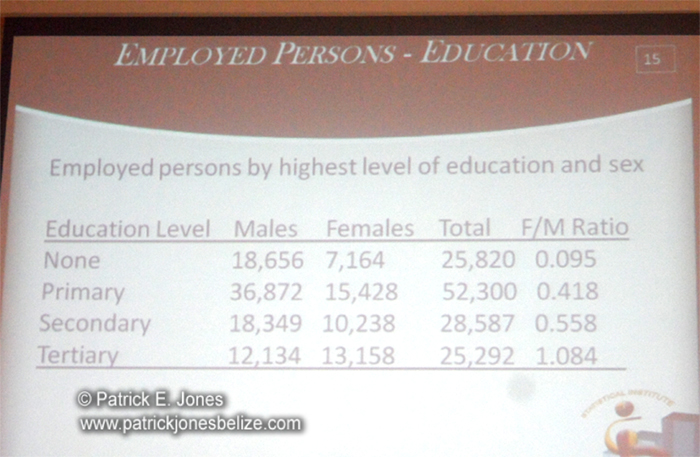 Wednesday, June 25, 2014. AARON HUMES Reporting: The Statistical Institute of Belize (SIB) held another in its series of press conferences, this time covering in addition to the monthly consumer price index and trade statistics news on life expectancy for Belizeans and the twice-yearly labour force survey.

Compared to April of last year, unemployment is down slightly from 11.7% to 11.1%. The last survey was actually in September and showed a rate of 14.2%, but that is due to seasonal employment fluctuations.

Continuing trends include one-fifth of the unemployed population being youths, and nearly 4 times as many women as men without a job.

The highest rate of unemployment is in the Belize District at 14.5%.

Turning to trade, Belize continues to suffer the ill effects of downturns in sugar, citrus and petroleum exports.

All three tumbled by as much as 30% each in the first five months of this year, but the first two are expected to rebound from slow starts.

As a result Belize exported just $255 million worth of goods and imported nearly $800 million, the majority fuel and manufactured goods.

Belize imports 95% of its fuel from Venezuela, but the imports actually from the former Dutch dependency of Curacao which refines the oil sent from Venezuela.

Belizeans of the current generation are living longer, on average, than there parents.

Life expectancy at birth for Belizeans is up by five years to 73.7, and the good news is that once you have survived your first year, you will live to see many more. 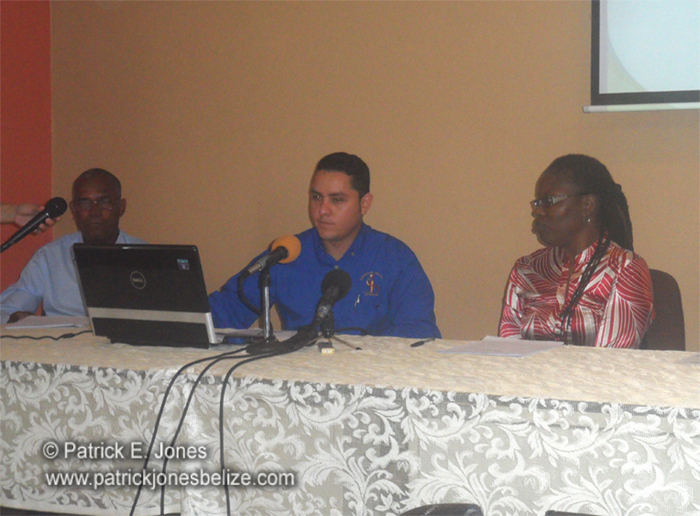 It has an impact on how Government assesses its pension schemes like Social Security, as retirees at 55 can expect to live another 25 years on average.

Insurance companies as well are looking at the life expectancy statistics to assess their schemes.

And finally, the inflation rate has remained stable at 1.6%, with airfare prices, certain foods like fruits and vegetables, water rates, rent prices and hotel prices carrying the bulk of the increase.

San Ignacio and Santa Elena residents are paying the highest rates at 2.8%, mostly for furnishing their homes.

Punta Gorda residents are at the other end of the spectrum at 0.8% rate of inflation.

Increases of some vegetables are especially punishing with black beans up a third and red kidney beans, which we also export, up 22.5%.