Dissension in the ranks at Ariel Rosado Foundation 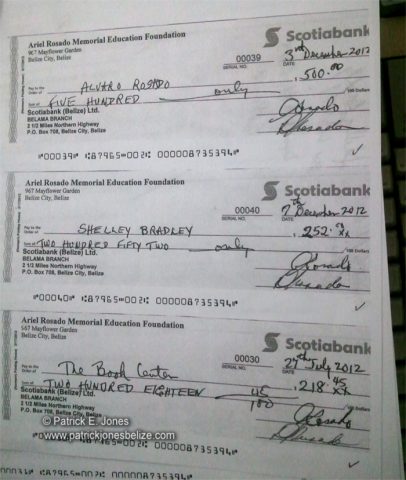 Thursday, July 17, 2014. AARON HUMES Reporting: The Ariel Rosado Memorial Education Foundation is confronting a break with key founders Bruce Sanchez Sr. and Jr., who according to president Dr. Alvaro Rosado, have a different vision in mind for the future of the Foundation.

Dr. Rosado said on Wednesday that for some time now they have been holding up the work of the foundation such that the matter has landed in court.

Today, Bruce Sanchez Sr, treasurer of the Foundation, sent out a press release under the letterhead of the Matura-Shepherd Law Firm in which he states that monies from the annual bike ride in memory of Ariel Rosado were strictly intended to meet the Foundation’s objective of providing educational opportunities in high school to less fortunate Belizeans and also to promote sports. The problem, he says, is that there are no proper guidelines on the operation of the Foundation, which has allowed for request to sign cheques made out to Dr. Rosado without proper documentation for its use and purpose, monies paid out without invoice or receipts for records; Dr. Rosado and his wife Dorla essentially assuming control of finances and abusing funds and expenses without consultation with the Sanchezes, to the tune of $13,293.55.

Additionally, the Sanchezes say there is a new entity emulating and collecting monies under the Foundation’s name, unknown to donors.

There is now an interim court order in place removing Drs. Alvaro and Dorla Rosado, as well as the Sanchezes, from managing the Scotiabank account, which is now under the charge of two trustees, and that the court has ordered that the trust deed guiding the conduct of the foundation be written and approved by the court.

By court order, the Rosados are dissuaded from starting a competing interest, collecting any funds from the public for the Ariel Rosado Scholarship Fund and not the foundation.

Bruce Sanchez stated, “All we have been asking for is accountability and proper processes to be put in place so there is no one man imposing his decisions on others and so that the public who keeps supporting this worthy cause knows that their monies are being well spent.”