Fatal traffic accident on the Yo Creek road

Plane vanishes from radar; believed to have crashed 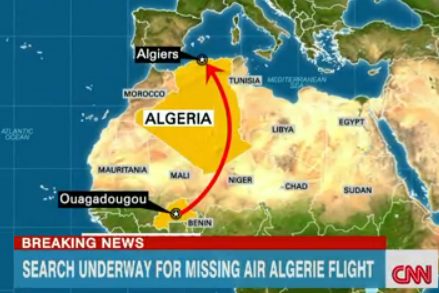 Another aircraft has been “lost” and hundreds of souls believed to have perished in another plane crash.

According to international media reports, the Air Algerie flight with 116 people on board disappeared from radar about 50 minutes into what was to have been a 4-hour flight from Burkina Faso to Algiers.

Flight 5017 is believed to have crashed in a remote part of Mali.

CNN quoted a statement from the Ouagadougou Airport and reported earlier today that wreckage, believe to be that of the aircraft, had been spotted by French forces in the area.

Among the passengers, according to Air Algerie officials, were 50 people from France; 24 from Burkina Faso; eight Lebanese; six Algerians; five Canadians; four Germans; two from Luxembourg; one from Mali; one Cameroonian; one Belgian; one Ukrainian; one Romanian; one Swiss; one Nigerian; and one Egyptian.