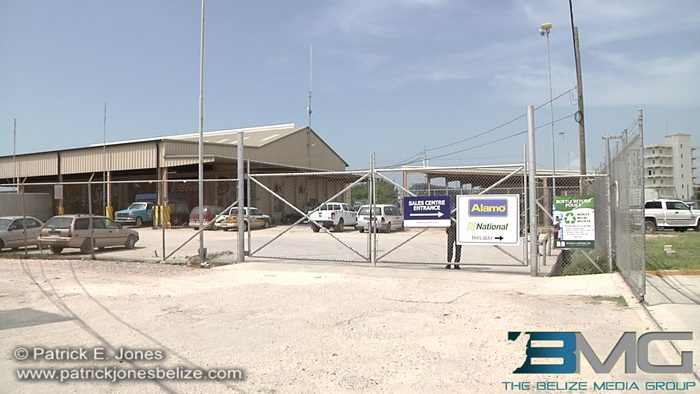 Between 8:00 and 9:00 a.m. office cleaner Suzette Pavon was visited by her common-law husband, one Ricardo Palma, at the Bowen and Bowen Limited distribution center on Slaughterhouse Road.

It is alleged that Palma attacked Pavon with a knife while her back was turned and slashed her throat.

She is now stable at the Karl Heusner Memorial Hospital, but her employers are trying to figure out how Palma got onto the compound. We spoke with Bowen’s public relations officer Christelle Wilson, who says Palma got past the security at the gate while it was open and he was tending to another man on motorcycle.

He managed to speak with Pavon for a few minutes, then asked her to get a glass of water.

While her back was turned, he inflicted the wounds.

Pavon was rushed immediately to the Operating Theatre at the Karl Heusner Memorial Hospital and has been stabilized, according to Wilson who says she may be released fairly soon.

Bowen & Bowen officials are investigating the breach in security that led to Palma slipping past a distracted security guard and actually carrying on a conversation with his intended victim.

It was not clear if he lay in wait for her or otherwise disguised himself.

Police investigations continue while Ms. Pavon recovers from her wounds at the KHMH.