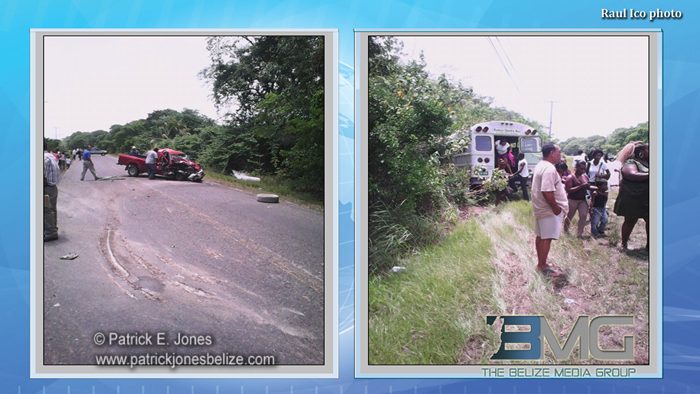 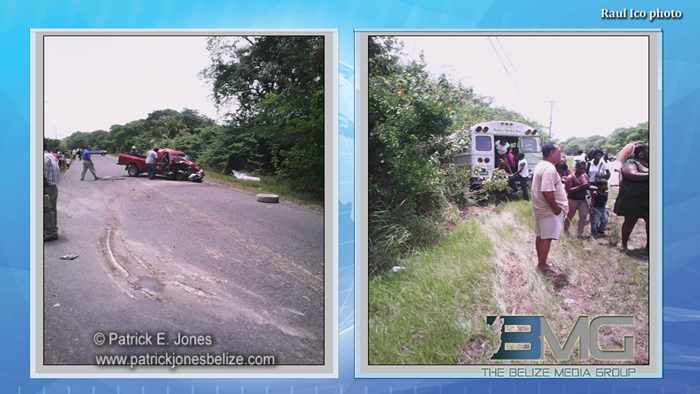 Saturday, August 16, 2014. AARON HUMES Reporting: There were two traffic accidents in Belize City on Friday,one of them fatal.

The accidents happened within an hour of each other, one on the Phillip Goldson Highway, the other on the George Price Highway.

The first took place in the vicinity of the Haulover Bridge on the Philip Goldson Highway around 11:00 a.m. when a Ramos Bus travelling to Belize City crashed head-on into an oncoming pickup truck.

As many as a dozen passengers aboard the bus sustained several injuries but none life-threatening and were taken to the Karl Heusner Memorial Hospital.

Owner of Bus, Bert Ramos, told reporters that his customers told him that the bus driver was not to blame, that he was trying to prevent the accident when the pickup truck was swerving too much and wound up running into him.

The other accident took place around 12:00 noon on the George Price Highway in the vicinity of Lords’ Ridge Cemetery.

The victim of that incident has been identified as Rigoberto Itch, originally from Big Falls, Toledo.

According to reports, Itch was knocked off his bicycle by a taxi vehicle while riding to meet with friends. He died on the spot.

The accident took place just down the road from where Frank Robinson was killed a few weeks ago.