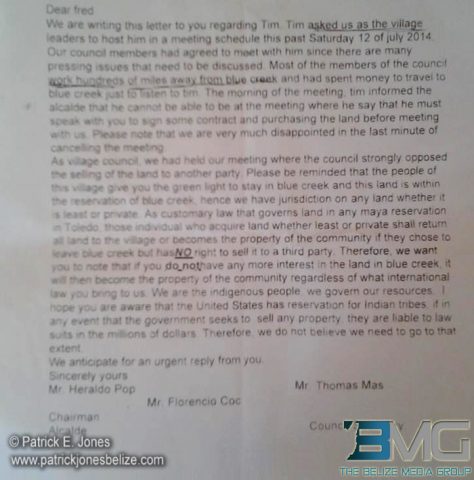 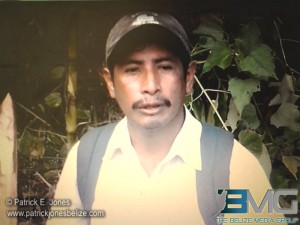 Friday, August 29, 2014. JUAN CAAL Reporting: The villagers of Blue Creek village, Toledo are up in arms and they want their chairman Heraldo Pop and the secretary of the Village Council Florencio Coc ejected immediately.

The anger of the people was raised when they learned that a letter was supposedly written on their behalf about selling of a private property in the village to a third party. 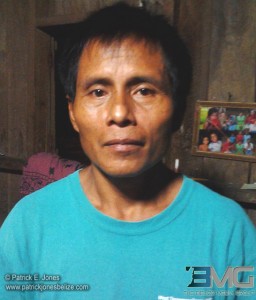 The allegation of corruption erupted on Sunday, August 24, when the Alcalde Thomas Mas found out that his name was written at the bottom of a letter that was sent to the owner of Blue Creek Rainforest Lodge about the selling of his property.

A copy of a letter bearing the names of both the Alcalde and the Village Chairman, which was sent to the owner of Blue Creek Rainforest Lodge earlier this month explains that under Maya Customary Land tenure, individuals who acquire land, whether lease or private have no right to sell to a third party if they no longer wishes to maintain any interest in the land.

The letter, which is undated explains that in such instances where a person no longer has any interest in land within a Maya reservation shall return said land to community ownership but cannot sell to a third party.

Alcalde Mas said he had no knowledge of the letter regarding the sale of land or that his name was on it.

And that was when the trouble started for the Chairman and the Village Council Secretary.

The community galvanized in their rejection of the alleged corrupt act and quickly formulated a petition demanding the immediate resignation of Heraldo Pop as Chairman and Florencio Coc as Secretary.

Residents of Blue Creek are calling for the ouster of Pop and Coc saying that “we will need to re-elect a new chairman and a new secretary for the village council and will pay no mind to these two individuals.” 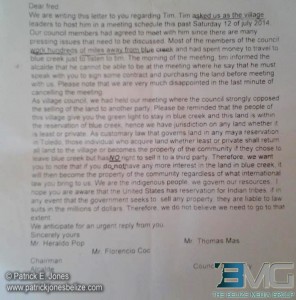 On Thursday, the Rural Community Development Officer Edwardo Cus went to Blue Creek village to intervene in the conflict and has met with the parties involved.

Although it was originally supposed to be only a meeting involving the Alcalde and the Village Council, nearly two dozen residents turned up at the meeting to voice their concerns.

The RCD Officer Cus, explained to the residents that the issue is being referred to the National Association of Village Council.

The embattled Chairman is digging in and has stated categorically that he will not step down.

That position is not sitting well with his constituents, who told him in no uncertain terms that they will not abide by his leadership.

The villagers of Blue Creek have gone on record as saying that as of now they do not consider their village as having a chairman.

The issue is made even more interesting in that the remainder of the village council and the Alcalde is standing in solidarity with the villagers in calling for the ouster of the Chairman and the Secretary.

Belize Media Group has tried repeatedly to obtain a comment from Mr. Heraldo Pop but so far without success.