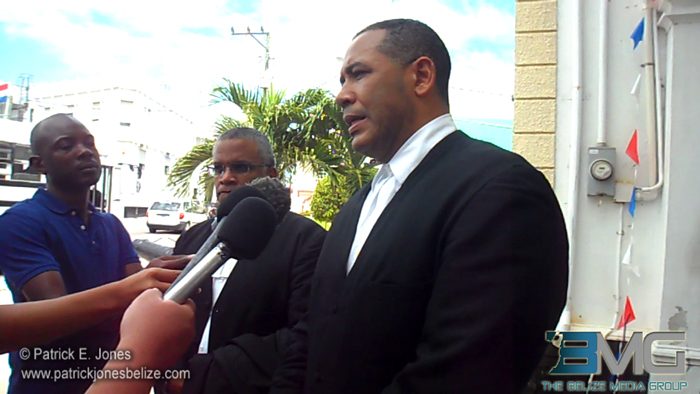 Wednesday, September 24, 2014. AARON HUMES Reporting:  Today, 29 year old Rohn Knowles and 34 year old Kelvin Leach, who have been in prison since September 15, were scheduled to appear in the Supreme Court seeking bail.

The duo was picked up by local authorities at the Philip Goldson International Airport in Ladyville apparently trying to leave the country.

They pleaded not guilty to failing to declare monies above BZ$10,000 to authorities and granted bail, but immediately detained on a warrant for extradition, though no corresponding request for extradition has been made.

But the matter which was to have been heard before Justice Denis Hanomansingh was adjourned to next Monday, September 29. Senior Counsel Godfrey Smith says no removal order from the court was made to the Central Prison.

There will be no court for the next two days, therefore the next available date is Monday.

Smith says the men were not prepared to flee because they felt they did not have anything to hide and wanted to abide by Belize’s laws while here.

Answering concerns that the men would skip bail if so granted, Leach’s attorney Senior Counsel Eamon Courtenay says there is no evidence yet presented that suggests that would be the case – and that their actions at the Airport itself are not suspicious. He says the men were cleared by authorities to leave as they faced no charges in Belize, but the word was not passed to the Airport’s officials.

Knowles and Leach are charged along with Belizean Andrew Godfrey, American Robert Bandfield, and Canadians Brian De Wit and Cem Can for alleged involvement in a billion-dollar scheme to defraud the U.S. Government of taxes.

The offices of Titan at the Matalon Building were raided by Police and the Financial Intelligence Unit (FIU) as well as other offshore companies caught up in the Except for Bandfield none of the remaining suspects have been picked up.

Appearing for the Government for the first time was Solicitor General Anita Jackson, joined by deputy Nigel Hawke.