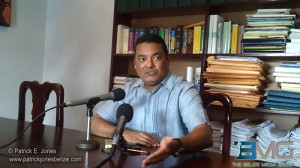 Monday, October 6, 2014. AARON HUMES Reporting: Leader of the Opposition People’s United Party (PUP) Francis Fonseca and his colleagues had much to say in Thursday’s meeting of the House of Representatives on the matter of border security in the wake of the killing of Special Constable Danny Conorquie.

And on Friday, there was a second, more aggressive incursion in the Camp Valentin area that saw angry Guatemalan villagers threaten to tear down the conservation post Belize is building in that area.

Fonseca told reporters today in Belize City that the Government must take a tougher stance on this and other critical issues with regard to border security.

He says Guatemala and its Government must be made to understand that their people are not allowed to conduct illegal activities on the Belize side of the border in open defiance of Belizean law and law enforcement.

Fonseca says it is a national issue that requires dialogue at all levels and the current administration must include everyone.

Fonseca further stated in regard to the news of Guatemalan contractors building the Coast Guard base at Hunting Caye in the Sapodilla Range in Toledo that he was not satisfied by the responses of the Prime Minister and Minister of National Security John Saldivar.

Heads must roll for their apparent ignorance, he maintains, as regardless of the wishes of the United States of America with whose military Belize partners, we cannot allow a country that continues to claim a majority of our territory to participate in building our national security apparatus.

Blame lies squarely on the Belizean authorities which failed to decipher the U.S.’s intentions, says Fonseca, as has been the case with several reported incidents of Guatemalan contractors and workers building Belizean military installations.

The Guatemala problem is not only one of criminality encouraged by deliberate poverty, but a blind eye turned by local authorities to a festering situation that is now threatening to explode.

There is much that needs to be done to correct Belizean misconceptions and fallacies about the Guatemalan claim and about Belizean history in general.

Fonseca also told us that while the PUP did not sponsor Friday’s demonstration in front of the Guatemalan embassy on A Street, King’s Park, led by political officer Gilroy Usher, Sr., and it does not condone the throwing of eggs by the participants, it does support the expression of popular outrage that it represents.

Belize does not want or need direct confrontation, only for Guatemala to understand that we are a sovereign nation whose borders and integrity must be respected.