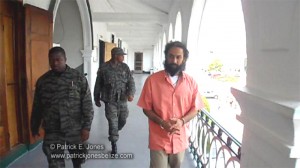 There he faces conspiracy and drug-related charges. But he has not given up and today he served notice of taking that fight to the Court of Appeal.

Seawell’s new attorney Anthony Sylvestre says the application for leave to appeal has been filed and awaits a response from the Government.

It will be heard on November 10.

Seawell is wanted by U.S. authorities in the state of Ohio on allegations that he and brothers Mark and Duane masterminded a large-scale cocaine moving operation between Belize and the U.S. from 1994 to 1997.

Mark Seawell’s case remains before Chief Justice Kenneth Benjamin for decision while Duane Seawell was extradited from Jamaica and convicted.

He is now imprisoned.