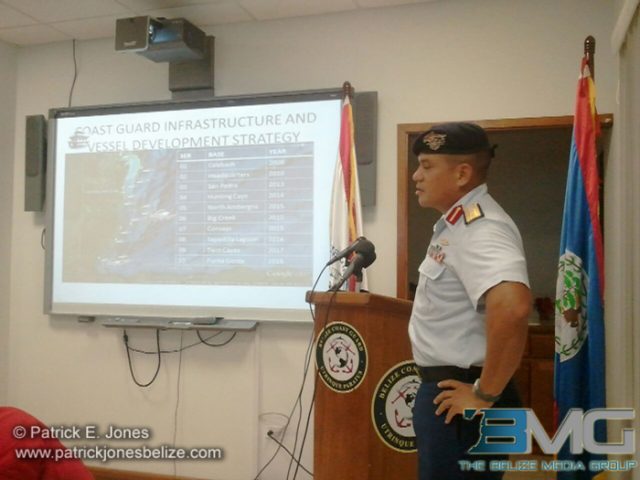 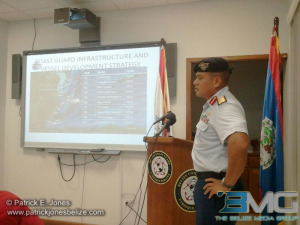 Tuesday, October 14, 2014. AARON HUMES Reporting: Belize’s national security was at no time under threat from the Guatemalan company BINARC or its workers who were building the Belize National Coast Guard’s forward operating base (FOB) at Hunting Caye in the Toledo District.

That is according to Commandant of the Belize National Coast Guard Rear Admiral John Borland, who spoke this morning during a briefing at force headquarters on the George Price Highway.

The Guatemalan company has been ordered to stop its work until it can find a Belizean sub-contractor to complete the project.

Time is of the essence, as the building is 75% complete and a lead time of three months is in place for full completion.

The company, which was approved to build both the Hunting Caye and southern San Pedro Forward Operating Bases under contract with the U.S. Army Corps of Engineers and U.S. Southern Command, had only knowledge of the plans for each structure designed by the Ministry of Works, and are not involved in any communication, security or other aspects of the bases’ operation.

They used Belizeans to build the San Pedro base, but there are no indications as to why they asked for Guatemalan workers to build the Hunting Caye base.

Hunting Caye is one of ten Forward Operating Bases to be built under the Coast Guard’s 15 year strategic plan, which aims to build its capacity to over 500 men and women capable of defending Belize’s coast and protecting the resources therein.

Admiral Borland said the company was vetted by the Corps and Southern Command and after starting the project indicated they would need Guatemalan workers to work under permit.

He was not able to answer to the process of obtaining such permits, however.

According to Admiral Borland, while the Belize Coast Guard was a facilitator for BINARC, it satisfied itself that the company did not threaten national security by espionage, terrorism or other high crimes and misdemeanors.

BINARC is not affiliated with either the Guatemalan military or with any subversive elements in the country, and so must be treated differently from, for example, the armed and hostile group of Guatemalans who attempted to menace the Camp Valentin conservation post manned by the Friends for Conservation and Development and Belize Defence Force in the Chiquibul Forest Reserve.

Taking heed to the concerns of Belizeans that Guatemala was in any way involved with such a project, the U.S. Army Corps of Engineers and U.S. Southern Command has agreed not to, in the future, offer any such contracts to Guatemalan companies.

Of the remaining bases, two of which have been completed and the others slated to start construction from north to south in the next five years, there are no Guatemalan contractors – Colombian, Mexican and American contractors have been agreed to work on each base.

The Ministry of National Security will assume oversight of the projects and ensure that all laws of Belize are adhered to, including hiring Belizean workers and, if foreigners are necessary, ensure that they are lawfully employed and present in Belize.

Admiral Borland says the Coast Guard and its brother forces remain committed to safeguarding the territorial and marine integrity of Belize, and at present are working on routine patrols to arrest and charge suspected Guatemalan illegal fishers and poachers in the South.