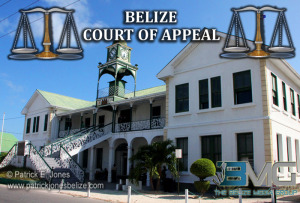 Thursday, October 23, 2014. AARON HUMES Reporting: The Court of Appeal began its final session for 2014 this week in Belize City.

Five appeals from convicted criminals were scheduled to be heard, but ultimately none of them were because the appellants had failed to provide their grounds of appeal and in some cases, did not even have attorneys.

Such was the case for 57 year old Winston Dennison, whose appeal was scheduled for Wednesday morning before Court of Appeal President Manuel Sosa and Justices Samuel Awich and Christopher Blackman.

Dennison wants to appeal his conviction and sentence of 18 years’ imprisonment on three separate charges of carnal knowledge.

But he has not been able to find legal representation and he told President Sosa that he would prefer not to defend himself again because he has not had time to study his legal records.

The court traversed the case to the first session for 2015 scheduled for March and advised Dennison to seek legal representation on his own or through the Legal Aid Bureau as the court is unable to provide such in non-capital cases; that is, in any other case than murder or treason.

In 2012 a jury of nine found Dennison guilty on each count based on the testimony of his 14 year old high school victim who told the court that he sexually assaulted her once in April of 2010 and twice in August of 2010.

He was given jail terms of five years for the first count, six for the second and seven years for the third count, after presiding judge Troadio Gonzalez explained that in his view, Dennison showed no remorse.

Dennison’s parole from a previous conviction for manslaughter for which he served ten years of a 25 year sentence was also revoked, meaning he serves the remainder of his time in addition to this conviction.

On Tuesday, the Court of Appeal was set to hear the appeal of 23-year-old Akeem Thurton who has already served 3 years of a 15-year sentence for attempted murder.

Bryan Neal, attorney for Thurton, asked that his trial be traversed to the next court session in 2015.

Thurton was convicted of the 2010 attempted murder of Senior Counsel Rodwell Williams, the law partner of Prime Minister Dean Barrow.

Neal is joined by attorney Nancy Anderson, a member of the Human Rights Commission in Jamaica who became aware of the case while on a working visit to Belize.

At his Supreme Court trial, Thurton was tried without a jury, and without the presence of an attorney.

That’s because no attorney wanted to take his case, as we understand it, in solidarity with their Bar Association colleague.

On May 31st 2010, Rodwell Williams was shot near the parking lot of the law firm of Barrow and Williams on Albert Street.

Williams was rushed to the Belize Healthcare Partners, and had to be flown to the US for treatment.

After making a full recovery, he testified that Thurton and another man identified as 28-year-old Ricky Valencia, now deceased, accosted him as he was leaving his office.

He testified that both men were on bikes but it was Valencia who approached him and shot him once to the stomach.  Valencia himself was later murdered in February of 2012.

Thurton’s mother was present in court and expressed hope that her son would “finally get justice.”

The session continues with eight civil appeal cases and concludes in early November.