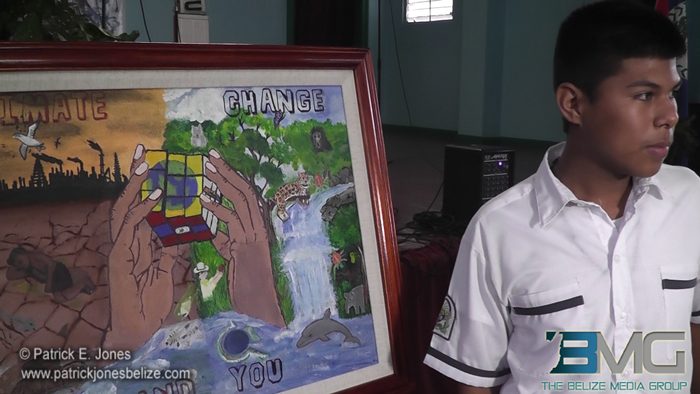 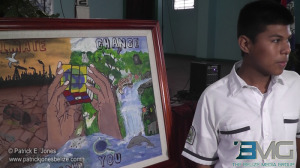 Monday, October 27, 2014. AARON HUMES Reporting:  A high school poster competition announced by the University of the West Indies (UWI) Belize Open Campus to design a poster communicating students’ representation of climate change and its impact on the community has produced a winner.

Pedro Bernal of Ladyville Technical High School took the $300 first place prize for his representation of Belize’s natural resources and the threat of their destruction due to climate change.

Bernal, who did not expect to win, said he juxtaposed the animals of Belize and other natural resources with the negative nature of climate change – flooding, deforestation and the like.

Ladyville Technical receives a trophy. 2nd place went to Caitlyn Tillett of St. Catherine Academy; third to the students of Class 4A1 at Gwen Lizarraga High School, and fourth to Neeraj Pagarani of Belize High School.

The contest is being held in conjunction with the Belize Country Conference on Climate Change being hosted by UWI and the Government of Belize, succeeding a conference held in 2010. 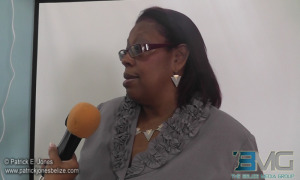 Head of UWI Open Campus Belize, Jane Bennett has extended an open invitation to all students, ordinary citizens and other affected by climate change to attend and take part in the two-day session.

The University put out a call for papers on topics to be addressed at the conference including energy, agriculture and food security, water, health, tourism, education and gender sensitivity in relation to climate change.

These will be presented and later published. Prime Minister Dean Barrow is due to be guest speaker.

The conference takes place on Tuesday and Wednesday of this week at the UWI campus on Princess Margaret Drive in Belize City.