SUV gets stuck in dirt on Corozal town street

Woman knocked down on the George Price Highway 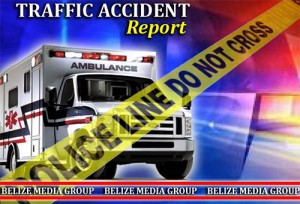 Tuesday, November 4, 2014. PATRICK E. JONES Reporting: Thirty one year old Elisa Hunter sustained head and body injuries this morning when she was knocked down near mile 8 on the George Price Highway.

According to police reports, Hunter had just alighted a west-bound passenger bus around 9 o’clock this morning and was in the process of crossing the highway, when she was reportedly knocked down by a black 2015 Prado assigned to Minister of Foreign Affairs Wilfred Elrington.

Police say Minister Elrington was in the vehicle at the time of the incident, but the vehicle was being driven by 25 year old Amir Garcia.

Police say Hunter, of a Belize City address is admitted to the Karl Heusner Memorial Hospital in a critical condition.

A notice of intended prosecution has been served on the Minister’s driver Amir Garcia as police investigations continue.