Stage is set for Battle of the Drums in Punta Gorda

Wednesday, November 12, 2014. AARON HUMES Reporting:This afternoon, we spoke with Leader of the Opposition Francis Fonseca in Belize City on several current national issues. We begin with the ongoing power struggle in the sugar industry between Belize Sugar Industries (BSI) and Belize Sugar Cane Farmers Association (BSCFA), with the sugar producers taking their case directly to farmers this week.

The Association says it is giving farmers the opportunity to hear why the BSI/ASR proposals are unsatisfactory. Fonseca says a third partner in the industry, the Government in the guise of the Sugar Industry Control Board (SICB) and Ministry of Agriculture, is noticeably silent, and wants to know why. He believes that the Government should take the lead in negotiating a solution.

But such negotiations, says Fonseca, should be based on the premises that the farmers are supreme. They own the sugar cane and all its products and should be given the opportunity to determine how much they should be paid by the producers. 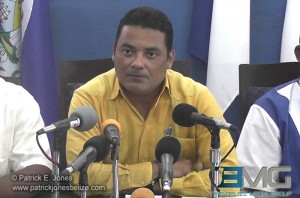 On the matter of the Petrocaribe loan motion in the House of Representatives next Tuesday, the ruling UDP has massed its supporters for a showdown on Independence Hill. The Government has issued its defense of the usage of the Petrocaribe monies, pointing to various infrastrucuture and other projects. But the PUP says they have yet to answer the central question of accountability of the funds, and therefore next week’s event is just a show. According to Fonseca some $2 million is expected to be spent and the UDP has intimidated civil servants and others into joining in and thrown big cash behind the effort, but it will be settled in the House, not outside.

Following the official confirmation of Orange Walk East representative Dr. Marco Tulio Mendez’ intention not to stand for another term in office, the PUP is in gear to name his replacement. Today, Dr. Mendez’ boss Francis Fonseca paid tribute to his accomplishments while also looking to the future. He indicated that applications are now being accepted by a special committee of the Northern Caucus of the party and former area representative Dave Burgos and current constituency chairman and town councilor Josue Carballo are among the persons interested in succeeding Dr. Mendez. If there is no agreement in the Northern Caucus the area will see a contested convention. But as for Dr. Mendez’ current duties he is not off the hook to serve his constituents. Leader Fonseca drew the parallel with the UDP’s banishment of Cayo Northeast representative and former Minister of State, Elvin Penner, who has been relieved of all his portfolios and relegated to the deepest backbenches for his transgression. There is no need for a by-election or other measure as Mahmud and Mendez will serve out their terms.

And finally, Lord Michael Ashcroft has hung like a spectre over Belizean politics for many years. Both parties have courted his support at one time or another. And so whenever the English baron and captain of industry, visits Belize, and requests to speak to the leader of the PUP, it’s news. But according to Francis Fonseca, the party neither wishes nor seeks the Englishman’s financial largesse, rumors of financial difficulties notwithstanding. The PUP has forsworn such generosity, and Fonseca says that “grassroots” fundraising has and will continue to sustain the PUP. Fonseca also stated that Ashcroft and his subsidiaries, some of whom have leadership positions in the PUP, will not get back control of Belize Telemedia Limited (BTL) as that is to stay in the hands of Belizeans.