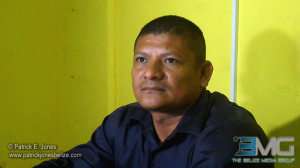 Friday, November 21, 2014. AARON HUMES Reporting: Police in Belize City have narrowed their list of suspects in the shooting of 46 year old Carlos “Zimbab” Abraham to two male minors in custody, and expect to crack the case very soon.

Abraham was shot three times in the neck and arm on Thursday morning while in “enemy territory” talking to a relative on Lakeview Street at its junction with Banak Street.

His condition has been stabilized, but the tension in Belize City has not.

At a briefing today at the Queen Street Police Station to update on the progress of the case, investigator and officer commanding Crime Investigation Branch (CIB), Superintendent Hilberto Romero, said police patrols already in place in the area caught one of the minors at the scene, who reportedly told them he was sent by a so-far unknown benefactor to do the shooting.

The two male minors currently in detention are thought to be affiliated with the Ghosttown Crips gang, which has been going through some recent instability following the exit of leader Roger Anthony who initially dropped the gang lifestyle and was then allegedly caught trying to discipline two of his lieutenants, the Meighan brothers, by shooting at their family home.

Abraham is known to be affiliated with the George Street gang, so it would seem that this is a cut-and-dry gang-related incident.

But police are not so quick to wrap up the case, according to Supt. Romero who says an exact motive has yet to be firmly established.

Police have obtained statements and leads which they continue to pursue.

And what does this mean for the peace and safety of Belize City residents?

According to Superintendent Romero police have increased their patrols in the area and rounded up persons who may decide to take retaliation for Abraham’s injury.

Police say they have yet to recover the firearm used in the area despite multiple searches.