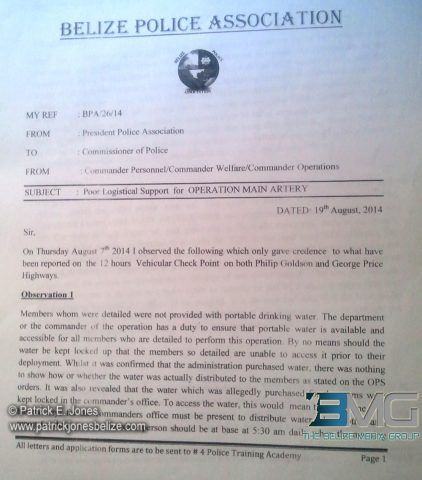 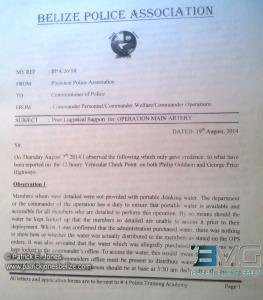 Tuesday, December 9, 2014. AARON HUMES Reporting: Citizens Organized for Liberty through Action (COLA) today released a series of files detailing correspondence between the Police Association and the Police Department high command dating back to 2011.

The files, it says, “detail an increasing frustration with the Police High Command’s inability and unwillingness to meet with the Police Association over its grievances concerning the constables, corporals and sergeants it represents.”

The Association also appears to have taken up the case of interdicted cop Dayton Sacasa, who was accused of extortion but saw the charges dropped earlier this year.

However, Commissioner Allen Whylie told the cop to stay home while a decision was made and ultimately the Department decided to continue the interdiction, warning that while the charges were dropped as a result of his accusers deciding not to pursue court action, his alleged behavior was still considered worrying for the Department.

Commissioner Whylie has repeatedly been contacted by the Association on issues such as these, with no apparent response except through his legal advisor, Inspector of Police Julius Cantun, to caution Police Association president Corporal Eldon Arzu not to go outside of the Department to address the issues until the Commissioner has responded.

Twice the Commissioner vetoed proposals by Corporal Arzu as Association president to meet with the Police Association of England and Wales and with the Ministry of the Public Service over the granting of allowances to public officers, although the law is not always clear as to whether this includes police officers.

The Solicitor General’s office says that except in specific circumstances which require consultation with them, it does.

According to COLA it wants to “give voice to the voiceless of the Police Department [and] put in the public view the many abuses officers suffer on a daily basis from their own high command.”

It accuses Commissioner Whylie of being “overmatched in his duties,” fingers the “political directorate including the Minister of National Security and his CEO” for appearing “directionless and concerned more with appearances that true development of the most important section of our law enforcement sector;” and slams the Government, which it says “has failed to secure the welfare of our most valuable public servants, those who put their lives on the line daily, often at great personal and family cost, to ensure that Belize remains safe and secure.”

Reports are that there is an upcoming election for a new executive for the Police Association and Corporal Arzu’s position is under threat.