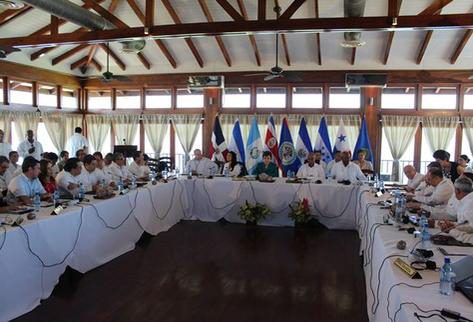 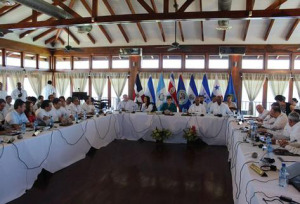 The handing over was done today during the forty fourth SICA Summit which was held in Placencia village, Stann Creek.

Delegations from SICA member countries Guatemala, Belize, Costa Rica, El Salvador, Honduras, Nicaragua, Panama and the Dominican Republic descended on the Placencia peninsula for the Summit, which dealt with a range of issues including regional cooperation, migration, security and climate change.

Prior to the SICA Meeting, the president of Guatemala Otto Perez Molina met with Prime Minister Dean Barrow during which both leaders committed to strengthening cooperation, security and economic links even as the two countries move towards the eventual settlement of Guatemala’s unfounded territorial claim to Belize.

Back in 1992, Guatemala recognized Belize’s Independence but maintains its claim to nearly half of the country.

A significant occurrence at today’s gathering of SICA leaders in Placencia was the signing of about a dozen or so bilateral agreements between Belize and Guatemala.

The Nicaraguan president Daniel Ortega also did not attend the SICA summit in Placencia but was represented by the minister of Development Orlando Solarzano.