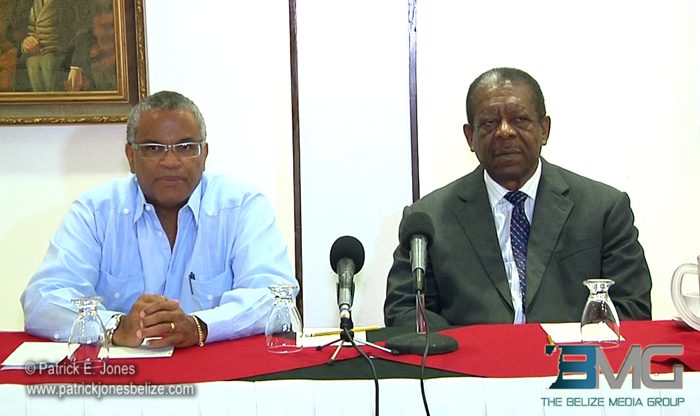 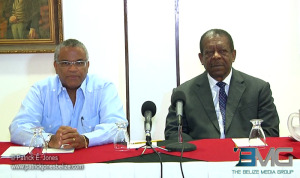 Friday, January 16, 2015. AARON HUMES Reporting: President of the Caribbean Court of Justice (CCJ) Sir Dennis Byron is on a working visit to Belize.

He is being hosted by the Bar Association of Belize.

On Thursday he met with Chief Justice Kenneth Benjamin and Opposition Leader and attorney Francis Fonseca, and was scheduled to meet with Prime Minister Dean Barrow and Governor General Sir Colville Young in Belmopan.

He was the keynote speaker at today’s Law Conference of the Bar Association.

Belize joined the CCJ’s appellate jurisdiction in 2010, one of only three CARICOM member nations to do so (Barbados and Guyana are the others) and has sent 29 cases to the court, which is seated in Port-of-Spain, Trinidad and Tobago. 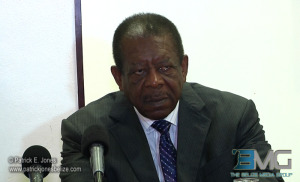 According to Sir Dennis the variety of cases from Belize – the Janae Matute medical malpractice case, the tort of misfeasance case against Florencio Marin Sr and Jose Coye, civil commercial disputes ranging from BNE to BTL – have helped the CCJ set precedent for the region in jurisprudence.

Sir Dennis reported on progress in the region to expand accession to the appellate jurisdiction of the Court, with several countries expected to make decisions shortly, including Dominica, Grenada and most of the Eastern Caribbean as well as Jamaica.

The Court has declined to intervene on its own behalf, leaving the political questions to the various legislatures.

Sir Dennis Byron indicated that the Court refused to engage in “marketing” or self-promotion, sticking to its mandate to bring justice to the Caribbean region’s residents.

Sir Dennis Byron also revealed that the Court is in talks to have its first-ever sitting in Belize by the middle of this year.

He did not indicate for which case it would be but stated that the Court would work on logistics to be ready.

The Court’s opening session for 2015 begins on Tuesday with case management scheduled for the original jurisdiction case of Maurice Tomlinson who is suing Belize and Trinidad and Tobago over claims he is being kept out of both countries due to his homosexual status and laws banning homosexuals from entering either country.

On January 22 the court will hear the appeal of Belize Natural Energy and Maranco Limited and on January 23 features hearings on the BTL and BEL nationalizations concerning submissions on the issue of remedies.

The court has announced a new judge, Justice Maureen Rajnauth-Lee to replace Desiree Bernard on the seven-member bench.

Also at the briefing, the president made remarks on the role of media, specifically comparisons to the CCJ’s open-door policy of recording video and audio of their sessions.

By contrast, local courts allow absolutely no recording of any kind inside court chambers, Monday’s ceremonial opening of the legal year a sole exception.

President Byron said their own recording helps to facilitate the region by making their work available to the public, but he warned that there are issues with ensuring the value and authenticity of “uncontrolled” media recording of court proceedings. 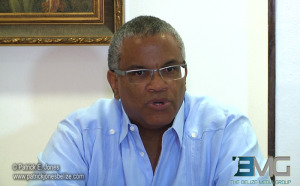 According to Bar Association President Senior Counsel Eamon Courtenay, the video link technology used for the CCJ hearings has also been used to take evidence from witnesses as far away as Moscow, Russia and the United States who could not travel to Belize for their hearings; however, he said he was not aware of any discussions to allow media cameras into the courtroom for trials.

Sir Dennis Byron also commented on the seeming disregard by Caribbean nations for the dissemination of the Court’s judgments.

He said that even if only to foster the regional sense of togetherness, the press should take advantage of the resources available to them on the court’s website and help the Court fulfill its mission.

Sir Dennis also discussed the selection of judges on the bench, the need for judicial independence and the perception of the court as a “hanging court,” which has largely been dispelled.

The court’s only case on the issue from Barbados dealt peripherally with the right of a condemned person to exhaust all appeal options before a death sentence is carried out.