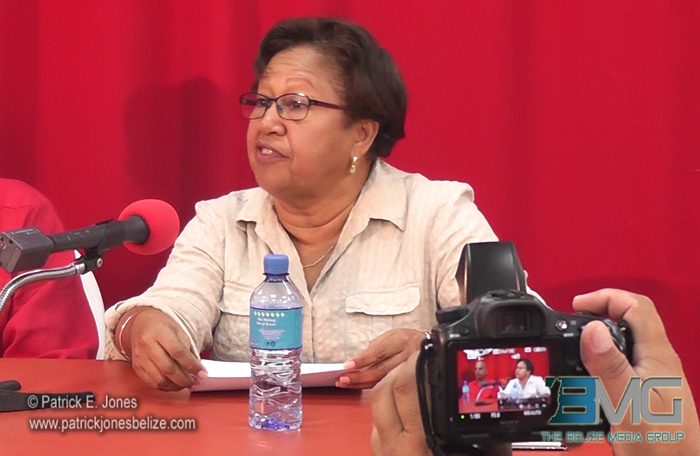 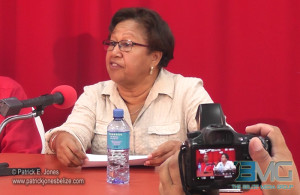 Wednesday, January 21, 2015. AARON HUMES Reporting: After a long career in the Public Service of Belize and work in the Caribbean region, reaching the rank of vice-president at the Caribbean Development Bank (CDB) Dr. Carla Barnett is entering electoral politics.

The native of the fishing village of Sarteneja, Corozal District and resident of Freetown today announced her candidacy in the Freetown division, which is currently held by Leader of the parliamentary Opposition and of the People’s United Party (PUP) Francis Fonseca.
The United Democratic Party (UDP) last held the seat in 1992 when Derek Aikman was forced to resign due to bankruptcy.
It is a tall order, and Dr. Barnett did not pretend otherwise when facing the press this morning at the UDP’s headquarters in Belize City.
But, exactly how do you beat a three-term sitting area representative, who is also Leader of the Opposition, with precious little political experience of any kind?
Dr. Barnett told reporters that she has already begun pounding the pavement in the division and has met with great support from residents who believe they are not being fully represented by Fonseca.
She insists that her lack of political experience – in the sense of “party politics” – and financial backing are little matter; what will carry the day is a history of being able to work to benefit the lives of Belizeans on the ground, which she says has been a hallmark of her career to date.
She says she can handle the criticism and any underhanded tactics flung at her.
Dr. Barnett’s candidacy – which is subject to potential challenges as the party is taking applications for a potential contested convention – is a major coup for the UDP, which has been beating its chest in the wake of a comprehensive defeat of the PUP to re-take the Cayo North seat and a messy but satisfactory conclusion to the sugar crisis. 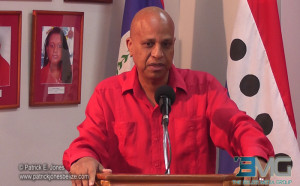 UDP Leader and Prime Minister Dean Barrow says that while Dr. Barnett’s work in the region has been exemplary, her home, and her people, have always come first; he praised her personal integrity and character as a key reason why the party was eager to get her on board.
As an example Barrow cited Dr. Barnett’s resignation as Financial Secretary for the Government under former Prime Minister Said Musa in the wake of the UHS scandal in 2007.
Former candidate Lee Mark Chang attended today’s event and has ceded caretaker-ship of the division pending Dr. Barnett’s official endorsement.