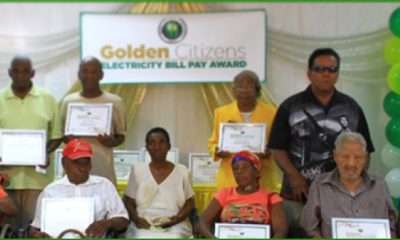 Thursday, January 22, 2015. BMG: The Belize Electricity Limited is exercising its corporate citizenship by extending a helping hand to some senior citizens.

As part of the state owned utility’s Electricity Bill Pay Awards Program, BEL will pay the monthly electricity bill for an entire year for 225 senior citizens.

A short ceremony was held this morning at BEL’s Corporate headquarters where some of the senior citizens received their award.

BEL says that the senior citizens whose light bill is being paid were chosen based of a set of criteria including that they be over sixty five years old and registered as a golden citizen; have an account billed under the social rate category and that they consume less than sixty kilowatt hours for the month at their place of residence.

Included in this year’s 225 awardees, are 89 who were selected in 2014 and will continue on to a second year of the program.

A third category of awardees is also being established, which will be known as the Lifetime Awardees who, once selected, will remain on the program permanently.