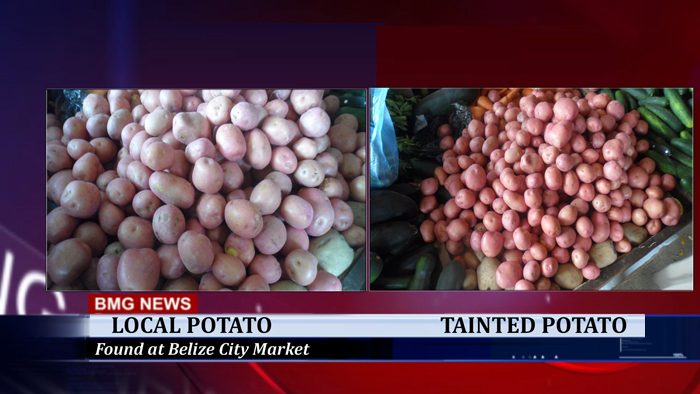 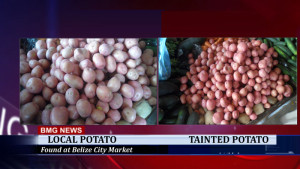 Friday, February 6, 2015. AARON HUMES Reporting: An investigation by Belize Media Group has uncovered evidence of tainted Mexican origin Irish potatoes in stock at several stalls in the Michael Finnegan Market in Belize City and the nearby wholesale market on Cemetery Road.

According to a vendor we spoke to on condition of anonymity, the potatoes were first sold to them two weeks ago before anyone knew of the dye used to turn the normal white potato into something resembling a Belizean-grown red Irish potato.

But the pinkish color is no match for the naturally rouge hue on the Belizean potatoes, which are skinned and scarred and easy to distinguish from the mostly smooth and round tainted variety. 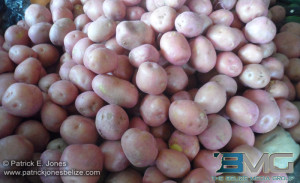 The Belizean potatoes are generally larger than their Mexican counterparts although we saw a few exceptions.

Apart from commenting on the unusual hue vendors saw nothing amiss, but with the food safety alert issued by the Belize Agricultural Health Authority (BAHA) they are now on the alert. 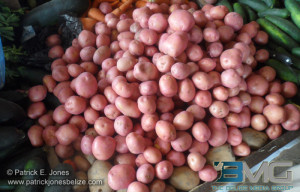 However, the vendors say workers from BAHA who visited on Thursday did not take more than a cursory look at the stalls and did not confiscate any items or ask questions.

With prices fixed at $95 per sack for wholesale and $1.25 per pound for retail, questions remain as to why importers chose to dye the Mexican potato, with suggestions that they were trying to attract consumers who may have been fooled by the appearance of the product.

However, the dyed potatoes are a health risk with multiple tourist guests in the Cayo District reporting sickness.

This afternoon the Belize Marketing and Development Cooperation (BMDC), which handles marketing and distribution of agricultural products, disclaimed any knowledge of the tainted potatoes.