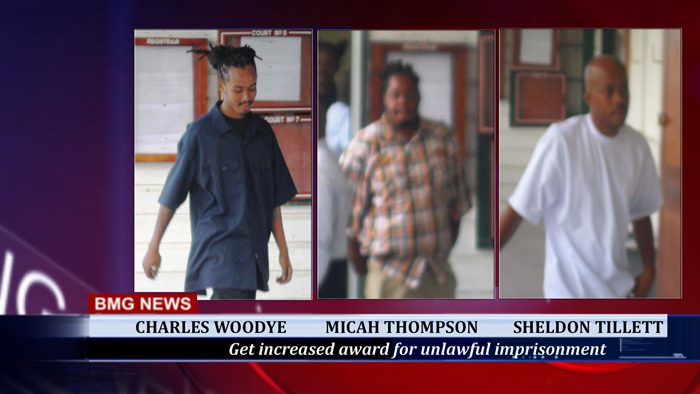 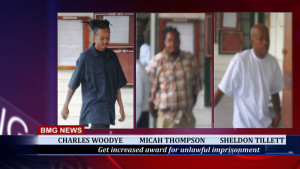 Friday, February 6, 2015. AARON HUMES Reporting: The late Charles Woodye, 24; Micah Thompson, 34; and the late Shelton “Pinky” Tillett, 30, all alleged associates of the George Street Gang, on Thursday won increased damages in the Court of Appeal for eleven months of false imprisonment on a murder charge after the appeal of the Government was dismissed.

President of the Court of Appeal Manuel Sosa and Justices Dennis Morrison and Samuel Awich awarded $30,000 to the estates of Woodye and Tillett and to Thompson who is still alive, increased from $25,000 awarded at the Supreme Court, and also gave them costs for the appeal.
The trio were among five men accused of the murder of John Paul Saldivar, 28, a tour guide of San Pedro, who was found partially nude and tortured in the Rocky Point area of Ambergris Caye on January 30, 2009.
Police believed at the time that the incident and a double murder reported later were drug-related, but the charges against Woodye, Thompson, Tillett and the others were withdrawn on order of the Director of Public Prosecutions (DPP) in January of 2010. They later filed suit.
The case was argued before then Supreme Court Justice Minnet Hafiz-Bertram, who ruled that the Police Department and investigating officer then-ASP Dennis Arnold, commander of the San Pedro Formation, failed to establish reasonable suspicion for the detentions, arrest and charge of the men.
Police had detained all three on the Boca del Rio Bridge on the night of January 30, 2009, after returning from Rocky Point.
ASP Arnold claimed that he was suspicious of the presence of the three men, well-known to police in Belize City, and decided to detain them as a result, but Justice Hafiz-Bertram ruled that this was not sufficient.
They were released 48 hours later, and Thompson was picked up again and questioned in Belize City a week later before the charges were laid.
Thompson, Tillett and Woodye had sued for $200,000 in general damages and special damages for recovery of attorneys’ fees and loss of earnings for Woodye, a records clerk with a Government department at the time of his arrest.
The Government parties, represented by Deputy Solicitor General Nigel Hawke and Crown Counsel Illiana Swift, repeated their argument from the lower court that damages should have been limited to the one hour each man spent in detention in 2009 before being remanded.
But the judge ruled that the claim, based on the award to police constable Gilbert Hyde who was accused and later cleared of conspiracy to commit murder, was distingushiable from that case and better decided on its own merits.
She awarded $25,000 to each claimant in general damages, attorneys’ costs of $5,000 split three ways for the retention of Kareem Musa and $5,000 separately to Tillett for the retention of Ellis Arnold, SC.
Woodye was awarded $8,459 in lost wages, and all three won costs.
Attorney for the trio, Agnes Segura-Gillett, said they appealed the portion of the judgment related to general damages on the ground that the amount was too low compared to similar cases in the Caribbean.
It was not fair of the judge, she said, to suggest that her clients suffered any less than Constable Hyde, who was only detained for 18 days.
The men claimed that they had been incarcerated in the “Supermax” section of the Hattieville Prison and denied certain privileges.
Woodye was killed in August of 2011 while the Supreme Court’s judgment was still pending. He was shot by an assailant in the Dolphin Street Fire Station while playing dominoes. Shelton Tillett and a female friend, Kamill Andrews, were gunned down at a gas station in April of 2012.
The Government can appeal to the Caribbean Court of Justice but according to Segura-Gillett her clients are reasonably satisfied and wish to move on with their lives, adding that the case sets a precedent to punish police officers who sloppily investigate major cases and lay charges without proof.