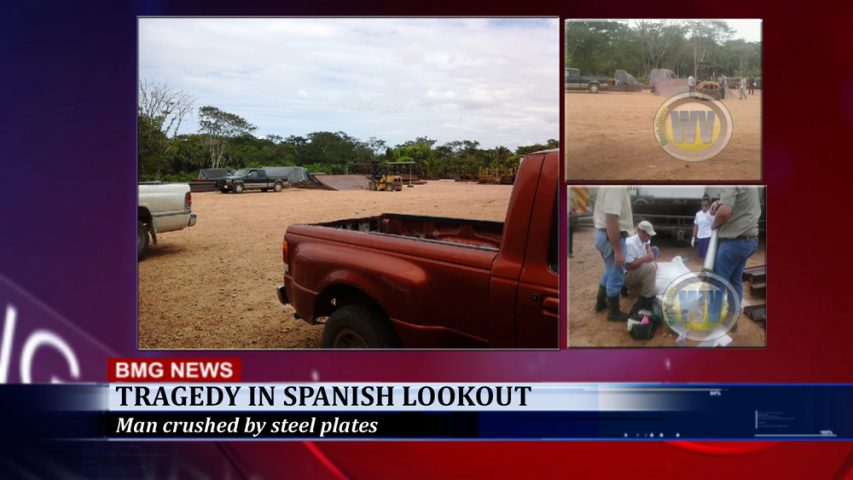 Crushed to death in Spanish Lookout 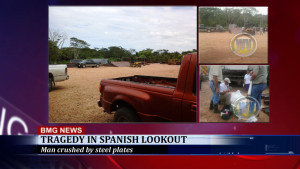 Crushed to death in Spanish Lookout

Saturday, February 7, 2015. BMG: A man from the village of August Pine Ridge, Orange Walk died on Friday morning when he was crushed by some heavy steel plated.

Ramon Ku, 38, was on top of a set of steel plates being moved by a forklift, when, according to reports, the steel plates flipped over.

The incident happened at Midwest Steel Company, located just off the Center Road in Spanish Lookout around 9:45 am on Friday.

Another man who was also on top of the steel plates managed to hold on to the forklift, but Ku could not and he was crushed by the falling plates.

Ku died at the scene.

The proprietors of Midwest steal declined our request to take photographs or video of the scene where the incident happened, so we had to stand on the roadside and use telephoto lens to get pictures of the area.

A source who was at the scene just moments after the incident, however, shared some cell phone pictures with us, showing paramedics trying to save Ku’s life.

One of the owners of Midwest Steel Company, Stanley Reimer told us via telephone that “we’d rather not,” when he was asked for comment on the tragic incident and to take pictures of the incident scene.

Police took statements from persons who were present at the time of the incident, including the driver of the forklift Henry Reimer, 64, who is one of the owners of the company.

Those statements and the results of a post mortem examination conducted on Friday evening at the San Ignacio hospital morgue are being sent to the Director of Public Prosecutions for advice on any possible charges.