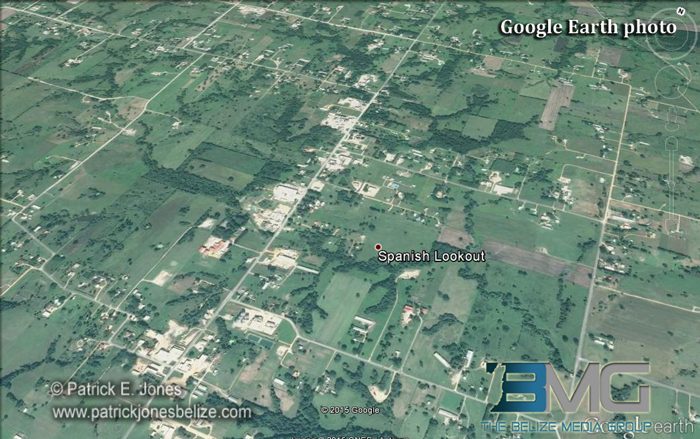 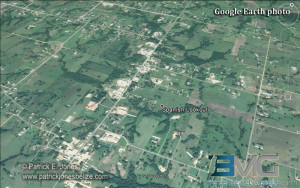 Thursday, February 12, 2015. BMG: A widely circulated social media report of the alleged attempted kidnapping of children in Spanish Lookout is much ado about an “innocent” incident.

It happened on Monday, February 9.

Two days later, the chairman of Spanish Lookout Clarence Dueck assigned Justice of the Peace Harry Letkeman to investigate the situation and today he released the finding of his investigation.

According to the report, two boys, ages 9 and 10 respectively had just left classes at the Palm Ridge School and were riding their bicycles. 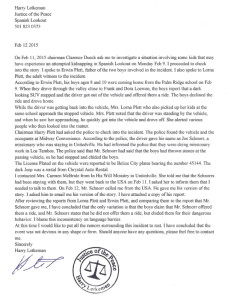 The boy’s father told the special investigator that the boys claim that an SUV, described as being “dark looking” stopped them as they rode through a valley and that the driver got out and offered them a ride in the vehicle.

The boys say that they quickly got on their bicycles and rode home.

The special investigator says that he also spoke with a woman who witnessed the event.

She had gone to pick up her children at the same Palm Ridge School was returning home when she came upon the scene and is reported to have seen the driver getting back into his vehicle and driving off as she approached.

The woman noted that “the driver was standing by the vehicle” and that when he say her approaching, “he quickly got into the vehicle and drove off.”

She alerted various people about what she witnessed and when the leaders of the community heard about it, the police was called in.

The police found the vehicle, a rental from Belize City parked at the Midway Convenience Store on Center Road. 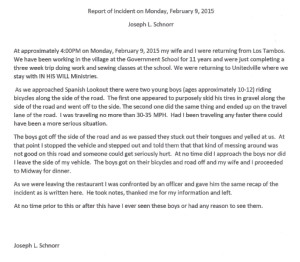 The occupants of the SUV were missionary Joseph Schnorr and his wife.

Their account what happened differs from the story that the boys gave their parents.

The Schnorr’s have since returned to the United States; but have spoken by telephone with the special investigator and went further, by sending a written report of that transpired.

The Schnorr’s say that they were doing missionary work in Los Tambos village and were on their way back home to Unitedville village where they were staying, when the boys allegedly threw stones at their passing vehicle as they drove through Spanish Lookout.

Mr. Schnorr said that he brought his vehicle to a stop, got out and chided the boys for their behavior.

In fact, a written report of the incident sent to Justice of the Peace Harry Letkeman, who was appointed as a special investigator to look into the incident in Spanish Lookout, the Schnorr’s say “there were two young boys riding bicycles along the side of the road. The first one appeared to purposely skid his tires in gravel along the side of the road and went off to the side. The second one did the same thing and ended up on the travel lane of the road.”

The written statement goes on to say that Mr. Schnorr was driving “no more than 30-35 miles per hour” and that had the vehicle been going faster “there could have been a more serious situation.”

Joe Schnorr further says that “the boys got off the side of the road and as we passed, they stuck out their tongues and yelled at us.”

And while the boys told their parents that the driver of the vehicle offered them a ride, Joseph Schnorr in his written statement said “at no time did I approach the boys nor did I leave the side of my vehicle.”

The special investigator said that based on information he gathered, including the written statement from Joseph Schnorr, he has concluded that “the only variation is that the boys claim that Mr. Schnorr offered them a ride, and Mr. Schnorr states that he did not offer them a ride, but chided them for their dangerous behavior.”

Special investigator Harry Letkeman says this confusion/discrepancy in the story is due to a “language barrier” and that “the event was not devious in any shape or form.”