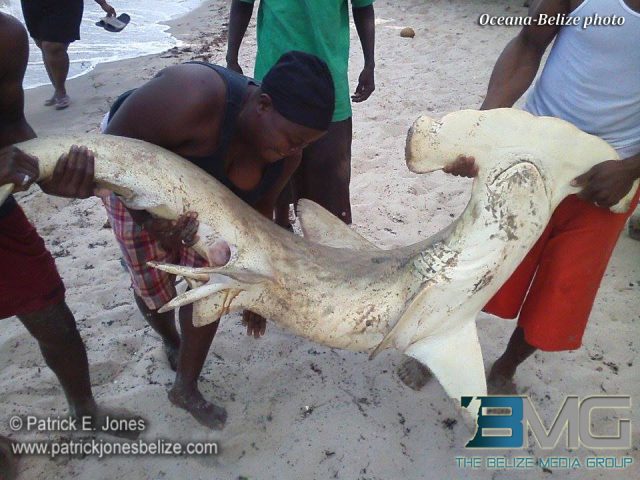 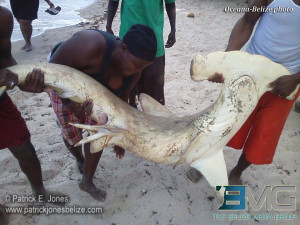 Monday, February 16, 2015. BMG: Concerns have been raised over the killing of a rarely seen Scalloped Hammerhead shark.

The shark died this past weekend in the waters offshore southern Belize and it has raised serious concerns for Oceana-Belize.

The organization today sounded the alarm after its investigation, based upon information it had received, revealed that the approximately eight foot long Hammerhead died because it was caught up in a Gill Net that was placed in the shallow waters at the north end of Hopkins village in the Stann Creek district.

Marine Scientist with Oceana-Belize Dr. Isani Chan this evening explained that the death of this rarely seen Scallopped Hammerhead shark signals the need to end the destructive use of Gill Nets in our waters.

Oceana-Belize says that the Scalloped Hammerhead is on the endangered list and was once a common sight in Belize.

Globally, it is estimated that in the last 30 years, the population of scalloped hammerhead sharks have declined by more than 95%.

In a statement issued today, Oceana Belize said that it stands by commercial fishermen who took a stand over 18 years ago to ask for a legal transition away from Gill Nets.

In Belize fishermen can use Gill Nets once they are registered; but it is unknown just how many fishermen are strict users of the Gill Net in their trade.

According Dr. Chan the sooner something is done about the use of Gill Nets in our waters the better it will be for our marine species.

Oceana-Belize says that across the world, gill nets are being replaced by “clean” alternative fishing gear because of the severe negative impact nets have on the environment especially as it relates to the bycatch of charismatic species such as dolphins, turtles and even manatees.