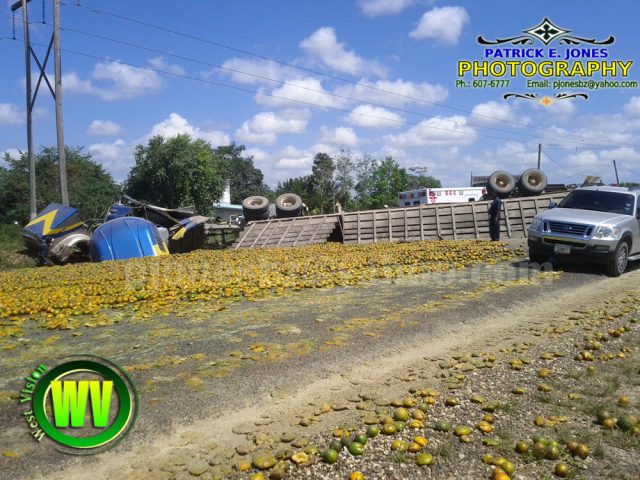 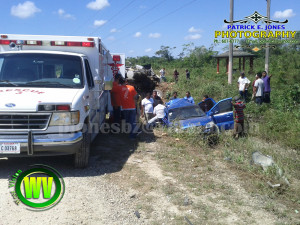 Tuesday, February 17, 2015. BMG: There was a serious road traffic accident this morning on the George Price Highway in St. Matthew’s village.

It happened around eleven thirty this morning and as this video footage show, involved a tow-head truck that was hauling oranges and a small SUV. 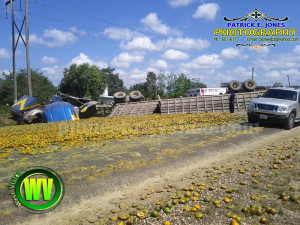 One of two American tourists traveling in the SUV died, while the other was treated first at the Western Regional hospital and later transported to the Karl Heusner Memorial in Belize City for further medical treatment. 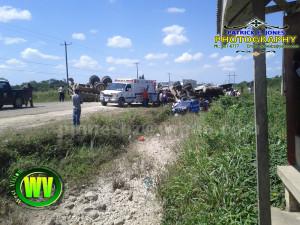 According to information received from Belmopan police, the truck and the SUV were both heading toward Belmopan.

The driver of the SUV, tour guide Leon Rodriguez has told authorities that he slowed down and was getting off the right hand side of the road, when the truck crashed into him.

The impact was massive, crushing the SUV and the truck spilled thousands of oranges on the highway.

Rodriguez was treated and released from the Belmopan hospital, as was one person traveling in the tow-head truck, identified as Emil Lisby who sustained a cut wound to the head.

Police say that a notice of intended prosecution has been served on both drivers, Leon Rodriguez from the SUV and Miguel Angel Arriaga who was driving the two-head truck.