Smart establishes its own transmission link in the Toledo district 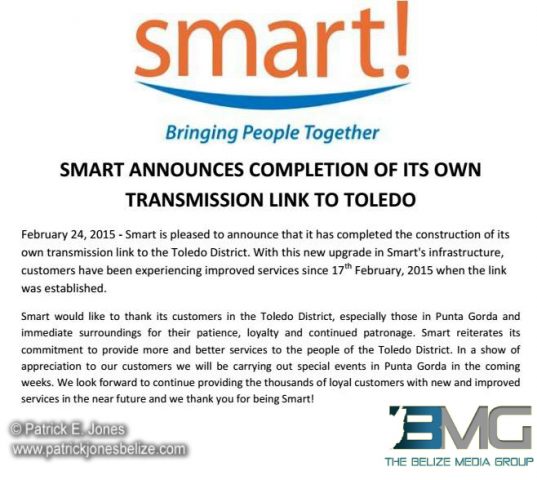 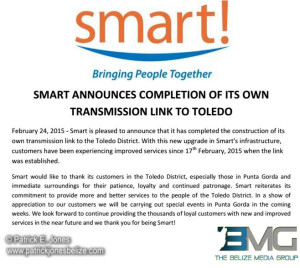 Wednesday, February 25, 2015. JUAN CAAL Reporting: Customers who use the Smart telephone service in the Toledo district can expect “special events” from their provider in the coming weeks.

That’s according to SpeedNet Communications, the parent company that owns the telephone company.

Smart issued a press release on Wednesday announcing that it had completed the construction of its own transmission link to the Toledo district.

Last December, the Chief Executive Officer for SpeedNet Communications Ernesto Torres told reporters that the transmission link would have been completed by the end of February, but the company release said that “with this new upgrade in Smart’s infrastructure, customers have been experiencing improved services since 17th February, 2015 when the link was established.”

Late last year, BTL had informed Smart that it could no longer accommodate them in providing the crucial link that would allow Smart to offer telephone and data service to customers in Toledo.

The new Smart transmission link is being provided through a tower erected on the outskirts of Bladen village on the Southern Highway.

The Smart release thanked customers for their “patience, loyalty and continued patronage,” and promised “commitment to provide more and better services to the people of the Toledo District.”