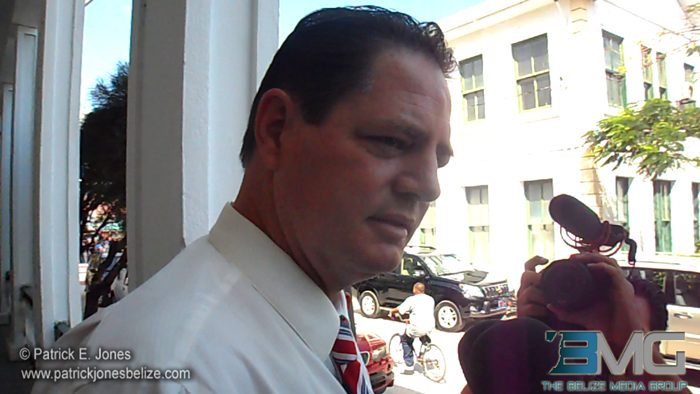 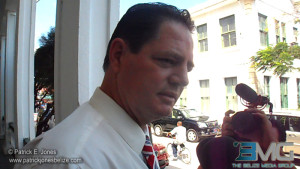 Friday, March 13, 2015. AARON HUMES Reporting:  Two weeks ago, at the conclusion of the hearing of the appeal of Geovannie Brackett and Nedal McLaren against the decision of Magistrate Aretha Ford to throw out summary charges against Cayo Northeast area representative Elvin Penner related to his facilitating a passport and Belizean nationality for jailed South Korean businessman Won Hong Kim, the embattled politician was targeted by irate protestors outside court, dodging eggs and punches on the way to his vehicle.

Anticipating a possible repeat, today police ringed the court both downstairs and upstairs, and Penner brought his own bodyguards to court.

But on this Friday there was no drama, no fuss: Chief Justice Kenneth Benjamin took a few hours away from vacation and delivered a straightforward verdict around 11:30 this morning.

The appeal was dismissed, as Chief Justice Benjamin ruled that none of the seven grounds of appeal stood merit. 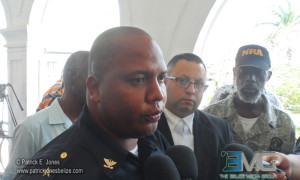 The attempt by Brackett and McLaren and their attorney, Kareem Musa, to have the Magistrate summon Commissioner of Police Allen Whylie to court to turn over the investigative file on Penner which he had declined by letter to give because the investigation was still ongoing, failed because not enough of a sufficient basis was laid to proceed and the two were essentially on a fishing expedition for material they could use to substantiate the charges of falsely vouching for the fitness of an applicant to receive a passport and making a false statement in a certain particular under the Nationality Act. 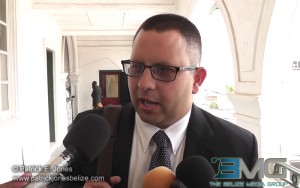 While they have not made any decision on appealing the case, Musa maintained that while the Magistrate was found to have erred in some respects it was not enough in the Chief Justice’s view to overturn her verdict.

Moreover, he says, it essentially validates the actions of the Government since the scandal broke.

Musa reminded that the Government officials to whom they appealed for assistance – the Commissioner, the Auditor General, the DPP – generally failed to do what they are authorized to do and Belize’s image suffers as a result.

Brackett says that while the ending was sour, the journey was bittersweet.

In his view, Penner is not off the hook – the court’s disagreement with their position is no endorsement of Penner’s actions.

But that the fact that he appeared in court as no politician has previously is a small victory.

And Brackett told us that he does not regret over-relying on obtaining the police file, because they did try to reach out to those involved; but it didn’t go very well.

COLA’s overtures were either openly rejected or subsumed to behind closed doors, such as the leak of the Auditor General’s Preliminary Report last year.

The court made no order for cost.