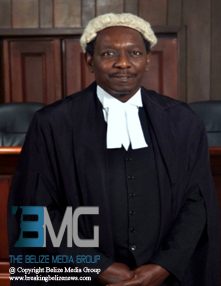 Saturday, March 28, 2015. AARON HUMES Reporting: 23 year old Akeem Thurton had expected to go home today after Court of Appeal Justices Samuel Awich, Dennis Morrison and Christopher Blackman ruled on his case. Despite being convicted in March of 2012 in the first ever trial of a murder charge heard by a judge alone – in this case Chief Justice Kenneth Benjamin – without a jury present, he has told all who will listen that it was not he, but the late Ricky Valencia who sensationally shot senior attorney Rodwell Williams outside his law firm Barrow and Williams on May 31, 2010. However, the court dismissed Thurton’s appeal and upheld his conviction; his sentence of 15 years was reduced slightly to 14 years and six months with effect from March 30, 2012, the date of sentencing. As of this coming Monday he will have served three years of that sentence. Thurton, represented by attorneys Nancy Anderson and Bryan Neal, presented twenty grounds of appeal ranging from charges that the amendments to the law are unconstitutional and prejudice the right to a fair hearing, were improperly applied to his case as it took place before they were passed, various errors of procedure by the trial judge, and a severe sentence in light of no previous convictions and the young age and otherwise good character of the accused. But the primary plank of the case is why Thurton was unable to properly defend himself against the charge because he was unable to get legal representation, partially due to Williams’ outsize reputation with the Bar, and then effectively left to fend for himself at trial. Neal says his client has indicated his intent to have the case appealed to the Caribbean Court of Justice (CCJ).

Williams was shot in the abdomen and survived five surgeries in Belize and the United States. The incident prompted a shift in how the Government handled the situation of crime in Belize, touching as it did the law partner of Prime Minister Dean Barrow. A few months later, after the Chinese community had marched through the streets demanding justice for the deaths of two Chinese female shopkeepers, the Barrow government passed amendments to the Indictable Procedure Act and Juries Act allowing for trial by judge alone, without a jury, on serious major crimes such as murder and attempted murder. The trial continued after Valencia was himself shot and killed in February of 2012, and Thurton had no representation in court, now a major plank of his case on appeal. Chief Justice Benjamin found Thurton guilty and sentenced him to 15 years in prison. After the case concluded last week Anderson told us that the judge could have done more to assist Thurton due to his lower understanding level.

Thurton’s family was present in court but declined comment.