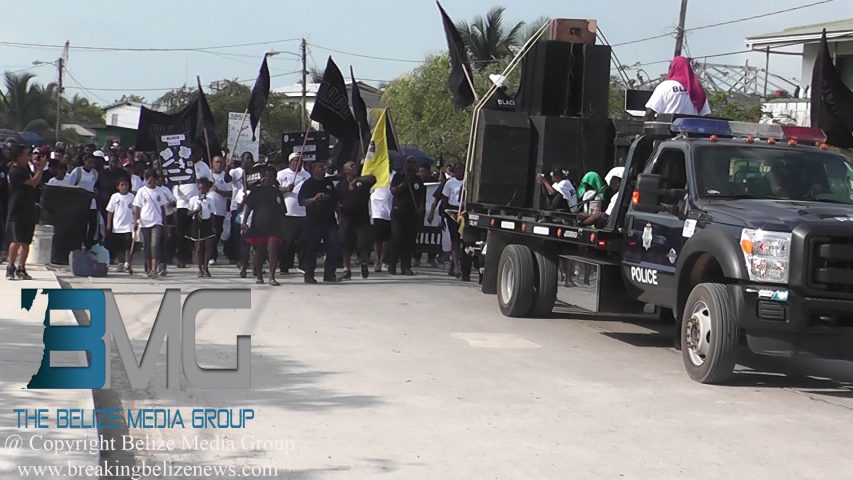 Saturday, March 28, 2015. AARON HUMES Reporting: Yesterday morning Belize City was shrouded in BLACK – not the color, but a movement titled Be Loving and Cease Killing, dedicated to lifting the gloom over the Old Capital as a result of criminality, which has become almost a lifestyle and a business in Belize City. The Police Department has tried to mastermind a shift toward community-involved policing and the big kick-off is the BLACK march which took off from the Yabra area around six and marched up Central American Boulevard and out to Battlefield Park for a rally. Most of the route encompasses gang territory, where the criminal element is often seen as heroic, benevolent and in some cases even necessary for the community’s survival.

Community Public Relations Coordinator for Eastern Division Douglas Hyde, however, says that crime should never pay and the presence of would-be heroes who have turned their back on the lifestyle represents a hopeful turning point. According to Hyde, the Police respect the “human element” of the gang lifestyle but that is no excuse for crime and the community is better off promoting positive things; for example, the work programs offered by John Woods through Cisco Construction. March organizer and deputy commander for Eastern Division Senior Superintendent Edward Broaster says this is the start of a sustained initiative by the Police Department to emphasize community policing and, he says, an overall sense of community. As an example he points to the “music wars” to be hosted by the Department between rival neighborhoods to provide a positive outlet through music.

Former political aspirant and youth activist Micah Goodin says change begins with an understanding that police officers are just like the rest of us, but that also means that police must abandon their more vindictive elements including the tactics of the Gang Suppression Unit (GSU) which has racked up multiple complaints.

A wide variety of organizations and residents participated.