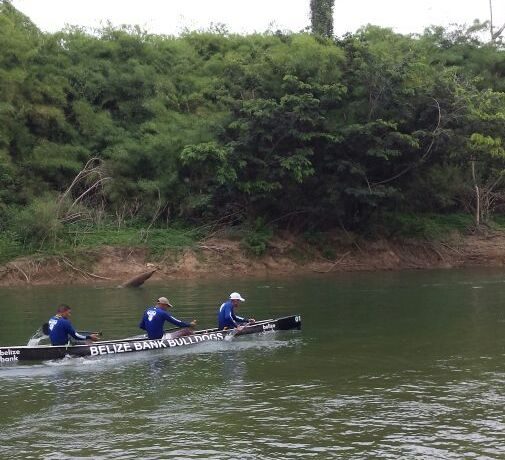 The BullDogs came in just behind an excellent Guydis Canoes Team who finished the race in 1:19:21 with the BullDogs finishing with a time of 1:21:11 respectively. The team of Armin Lopez, Erwin Cruz and Bayron Cruz made up the BullDogs team in the all-male race.

The dramatic race had the crowd on their feet as they neared the finish line. The Westrac Singers came in third place with the Western Homes Supplies team coming in fourth. Fifth place went to the Challenge Gobie Foundation team.

The race began at 1 p.m. at the main fair area. The course went up the river along the main road to swing around the buoy and back down to the marina. With another swing around a buoy, the canoe teams then headed back to the main area to the finish line.

Earlier in the year, the Belize Bank BullDogs participated in the La Ruta Maya Race where they finished a respective fourth place. This was no ordinary race however, as the Men’s Canoe team paddled swiftly to save a drowning man. Their focus became saving the man instead of winning the race and their efforts were successful. Paddler Amado Cruz jumped overboard to rescue the man, while Paddler Armin Lopez performed CPR.

Shortly thereafter, the race’s rescue team came to assist the rescue, allowing the Belize Bank BullDogs to get back into the race. They made a very valiant effort to catch up with the leaders and actually were in striking distance, but ended up with a fourth place finish out of 78 teams that participated in the race.