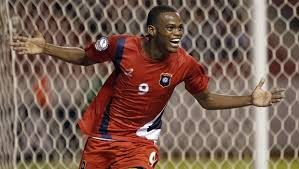 Monday, April 13th 2015. Aaron Humes Reporting: Fresh from a disappointing performance in the opening round of 2018 World Cup qualifications where Belize narrowly squeaked by the lowly Cayman Islands, and a promising debut in beach soccer where Belize won one of three games in group play at the regional championships in El Salvador, the Football Federation of Belize (FFB) met in General Congress over the weekend to discuss its plans and objectives for football in the coming year.

But the primary speculation rests on the fate of Deon McCauley, the young goal-scoring machine who was controversially left out of the selection that played the Caymans to nil-nil and one-one draws in the qualification series in March. FFB President Ruperto Vicente confirmed that McCauley has not been dropped from the national team program and is on the provisional squad for Belize’s second round with the Dominican Republic, but he will not be given special treatment.

The National Team Manager has confirmed that McCauley remains part of the program, says Vicente, but he is not set apart from his fellows on the Jaguars. And while Vicente says McCauley is as important as any other player, he will have to pay his own way here as the Federation only pays expenses for players attached to international teams which McCauley currently is not. The Federation is only obliged, Vicente says, to pay for international-based footballers signed to a team or in similar circumstances.

McCauley played last year with the Atlanta Silverbacks of the U.S. Second Division North American Soccer League and last appeared for Belize in the 2014 Copa Centroamericana tournament. He is coming off an injury sustained near the end of last year though he said he had fully recovered by the time of the World Cup qualifiers. He has scored 17 goals in 32 appearances, which puts him as top goalscorer and joint fourth most-capped player in Belize team history.

Turning back to the Congress itself, Vicente says the Federation will be getting assistance from FIFA for changes to the top semi-professional league as well as new disciplines such as futsal, football played between five-man teams.

Elections are planned for the district associations leading up to national executive elections due next year.