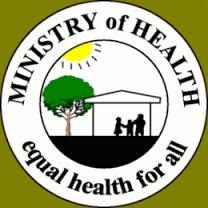 Tuesday, April 14th, 2015. BMG: A new Vaccine Storage Facility will be inaugurated on Wednesday at the Western Regional Hospital Compound. This new facility which will primarily be used as storage was constructed after officials from the Pan American Health Organization (PAHO) carried out several evaluations of the National Vaccine Storage Facility and saw the need. 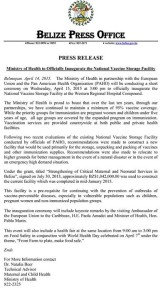 Officials say that this new facility, built on higher ground, will aid in better management of the supplies in the event of natural disasters or other emergencies, and will be a step up in the prevention of vaccine-preventable diseases in the vulnerable groups such as children, pregnant women and non-immunized population groups.

This newly constructed facility will be inaugurated on Wednesday, April 15, 2015 at 3:00 pm, with a ceremony to be held at the Western Regional Hospital compound. This inauguration ceremony will include keynote remarks by the Ambassador of the European Union to the Caribbean, H.E Paola Amadei and Minister of Health Hon. Pablo Marin.

The event will also include a health fair from 9:00 am to 3:00 pm on Food Safety under the theme, “From Farm to plate, make food safe.”

Reports are that the cost of the newly built structure was over 1 million dollars, which a grant was obtained from the European Union in July of 2013.