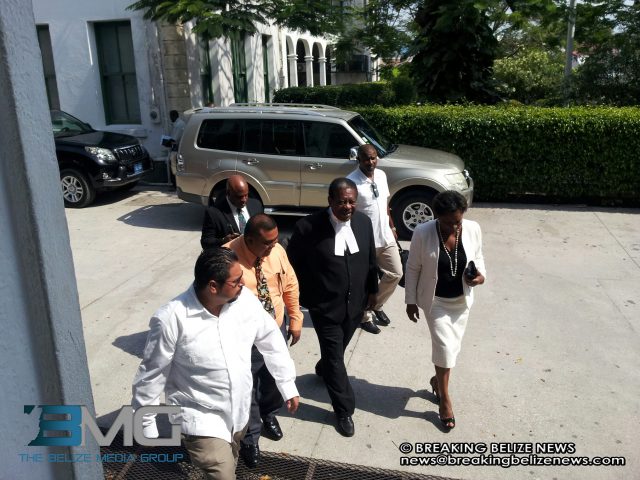 Monday, April 20th, 2015. Aaron Humes Reporting: The seven-member panel of justices of the Caribbean Court of Justice (CCJ) arrived at the No. 1 Supreme Court in Belize City this morning for a historic first itinerant session in Belize. 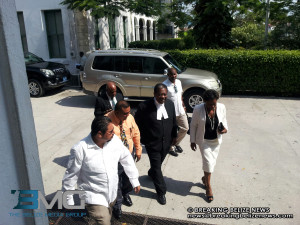 The CCJ is celebrating the tenth anniversary of its founding as final court of appeal for the region, while Belize is marking 5 years since acceding to the CCJ as final appellate jurisdiction.

Before hearing its first case this morning, the Court listened to remarks from Senior Counsel Eamon Courtenay, delivered on behalf of the Bar Association of Belize, officially welcoming the Court to Belize and expressing its satisfaction that Belizeans can finally see the Court at work and be convinced of its importance.
In reply newly elected female Justice Maureen Rajnauth-Lee in her maiden address expressed personal and professional gratitude to the people of Belize and the staff of the local courts for their courtesy in welcoming the CCJ to Belize, saying that the court hopes to not only “flourish in Belize’s shade”, referring to the National Motto Sub Umbra Floreo, but also to dispense justice in a timely and meaningful way. 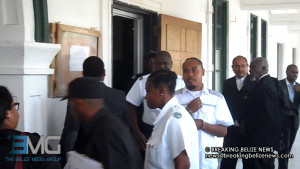 The Court’s first case was a criminal appeal in which convicted murderer 28 year old Gregory August sought special leave to appeal his case to the CCJ. He was successful and becomes the subject of Belize’s first criminal appeal to the court. During arguments the Court expressed its immediate concern that one of the grounds presented should be properly argued in the Court of Appeal. It decided that the special leave would be granted, but stayed until the Court of Appeal hears the new arguments as soon as possible and makes a determination, whereupon the CCJ would hear the case in its entirety.

August was convicted of the murder of physically disabled resident of Western Paradise 73 year old Alvin Robinson nearly six years ago in May of 2009. August is accused of stabbing Robinson, who was both physically disabled and blind in one eye, 9 times in his face and neck. Robinson was found on his bed clinging to life and died while on his way to the hospital. On November 21, 2012, August was convicted of Robinson’s murder by a jury in the courtroom of Justice Adolph Lucas. 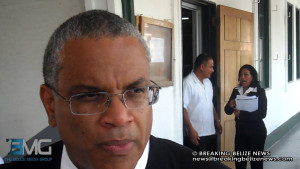 The evidence at the trial was circumstantial and the prosecution had relied on blood that was found on a tennis shoe and clothes that belonged to August. The blood matched Robinson’s blood type, but Belize does not have the capability to test the DNA of the collected blood samples to see that they did in fact match Robinson. At the hearing in the March 2014 session of the court August’s then attorney Anthony Sylvestre, who replaced late original trial attorney Lionel Welch, argued that the circumstantial evidence was insufficient in itself to tie his client to the crime and that Justice Lucas failed to properly direct the jury on the legal concept of “joint enterprise”, as it was alleged that August and another unknown person killed Robinson.

The case now goes back to the Court of Appeal for argument of additional evidence, most particularly the constitutionality of August’s sentence as Courtenay explains that life imprisonment without parole contravenes the fundamental right given in the Constitution to relief from cruel, inhuman and degrading treatment or punishment, found in Section 7. A person is sentenced as a form of deterrence, a payment of debt to society and an opportunity for reform. If one is not allowed out of prison after serving a reasonable amount of time and being a model prisoner, changing one’s life and completely reforming oneself, then further imprisonment runs the risk of contravening the rights of prisoners which would be against the Constitution.

Director of Public Prosecutions, Cheryl Lynn Vidal, represented that office and elected not to challenge the leave in order to seek clarity of the issue of circumstantial evidence leading to convictions as well as settlement of the Constitutional issue. Courtenay says similar cases have been taken to the European Court of Human Rights and the Judicial Committee of the Privy Council, the CCJ’s predecessor, which they hope prove persuasive at the lower court and before the CCJ.

The court will also hear the appeal of the Maya Leaders Alliance and alcaldes of Toledo against the Government in relation to the rights of the Maya to land in that district. That case is scheduled for 10 a.m. on Wednesday.
Belize is one of four Caribbean countries to use the CCJ as its final court of appeal. The Court is meeting at the Supreme Court of Belize in the chamber of Chief Justice Kenneth Benjamin.