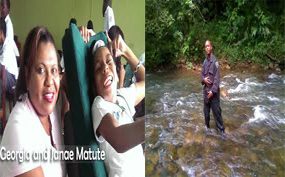 Tuesday, April 21st 2015. Aaron Humes Reporting: The families of Janae Matute, the Belmopan high schooler suffering from cerebral palsy due to a doctor’s miscalculation of her delivery date, an d Daniel Conorquie, the special constable gunned down in the Caracol Archaeological Reserve last September, are receiving payments from the Government of Belize in relation to their cases.

In the case of Janae and her mother Georgia, they are following through on a decision by the Caribbean Court of Justice that found Dr. Raju Meenavalli liable while in the service of the Government. Previously the Government had elected not to challenge the Court of Appeal’s finding against them. Conorquie’s case is a little different: his killers have not been found and officially the Government’s liability in the case if any has not been determined. However, it was determined to assist the family as best it can. Financial Secretary Joseph Waight updated both cases today. The Government has reached a payment schedule with the Matute family which it is meeting. It has yet to decide on whether Conorquie’s family will receive further payments beyond the ex gratia payment given shortly after his death.