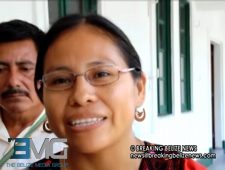 Tuesday, April 21st 2015. Aaron Humes Reporting: Ahead of Wednesday’s arguments in the Caribbean Court of Justice (CCJ) sitting in Belize, the Government of Belize appears to have conceded ownership of lands occupied by the 33 Maya villages in the Toledo District to their residents as communal property. Rulings in 2007 and 2010 by former Chief Justice Dr. Abdulai Conteh were challenged all the way up to the CCJ which set hearing for this week. But in a preliminary case management conference on Monday the Government, represented by Senior Counsel Denys Barrow and Naima Barrow, agreed that the Maya do have a historic claim to the land, which Denys Barrow compared to “squatters’ rights” as exercised elsewhere in the country. The decision essentially reaffirms the recognition of the rights of Maya as human beings and their historic claim, Barrow said. epresented by Senior Counsel Antoinette Moore, had argued on the ground of indigeneity – that is, that they were and are the first settlers of the settlement of Belize. The two sides agreed to set that aside, but essentially, according to Moore, the ruling stands and upholds the prior rulings of the Court of Appeal and Supreme Court. The COA had not granted the level of relief that the Mayas sought in relation to their cross-appeal.

Christina Coc, spokesperson for the Maya Leaders Alliance, told the press that they are ecstatic and pleased that the government has finally aligned themselves with the right side of history. The only matter remaining is the claim for damages. According to Moore, pecuniary or actual damages are being sought by residents of one village who lost crops to the bulldozer of an outsider who claimed a lease to lands in that village, and general damages for the long-standing fight to maintain possession of lands to which they have always claimed and the government either failed to recognize or having recognized, failed to protect those rights. Barrow explains that “Government is saying that government is not liable to pay any damages and that any damages which should be paid for a particular injury done should have been claimed against the person who did the damage and not government.” Arguments will be heard on Wednesday, April 22 at 10:00 a.m.