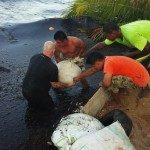 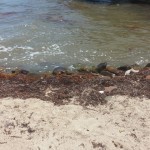 ed thousands of visitors annually and over the course of a week, its appeal has drastically changed. As a result, the owner of Coconut Row Resort in Hopkins Village is currently looking for someone with technical expertise to rebuild the beach in front of the establishment. 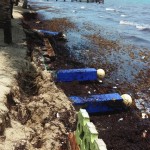 st pace. Currently, some areas have lost 12 feet of beach in just the last few days and the coconut trees which was 8-10 feet from the water’s edge has completely collapsed.

According to information posted on the resort’s internet page, the owner along with the Chairman of Hopkins quickly called the Department of the 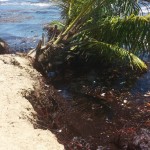 Environment (DOE), the lands department and Belize Tourism Board (BTB) for assistance. Shortly after, BTB and DOE responded and determined that the problem was being caused by a groyne built by Hopkins Bay.

This groyne has been quite controversial already, as it is widely attributed as the reason properties on the North have lost so much beach over the last few months. Hopkins’ Bay used to be by the tree line and now it has stretched far beyond that since the groyne is pulling in all the sand from the lagoon that would normally reach areas such as the front of Coconut Row. 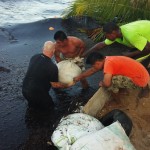 Authorities at DOE said that they would recommend immediate removal of the groyne but only the lands department has the authority to do so and the owner was advised that without political aid, the process will take a really long time. For the Coconut Rows owner, all there is to do now is to alleviate the erosion by placing sandbags. According to the resorts page, the unsightly beach erosion is a major reason to a decline in visitors and tourists.