Consumer Price Index down by 1% 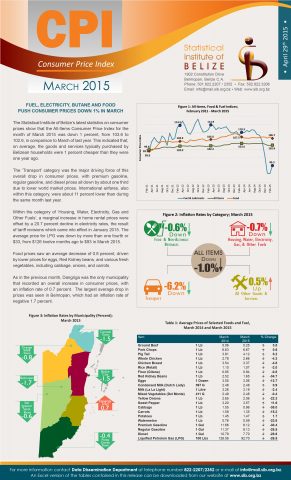 The figures reveal that the All-Items Consumer Price Index for the month of March 2015 was down one percent.  This indicated that, on average, the goods and services typically purchased by Belizean households were 1 percent cheaper than they were one year ago.

The ‘Transport’ category was the major driving force of this overall drop in consumer prices, with premium gasoline, regular gasoline, and diesel prices all down by about one third due to lower world market prices. 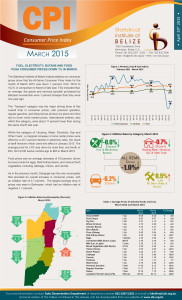 category of ‘Housing, Water, Electricity, Gas and Other Fuels’, a marginal increase in home rental prices were offset by a 20.7 percent decline in electricity rates, the result of tariff revisions which came into effect in January 2015. The average price for LPG was down by more than one fourth or $33, from $126 twelve months ago to $93 in March 2015.  Food prices saw an average decrease of 0.8 percent, driven by lower prices for eggs, Red Kidney beans, and various fresh vegetables, including cabbage, onions, and carrots.