Rawell Pelayo steps down as Vice President of the FFB 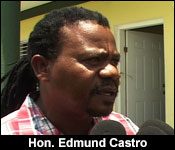 Thursday May 14, 2015. BMG: Hon. Edmund Castro, Area Representative for the Belize Rural North area, seems to be confident about the upcoming UDP convention in which he will be facing Dwight Tillett, a former campaign manager of Castro and a former CEO in his Ministry. 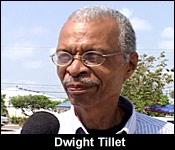 Castro has been thrash talking about his opponent and say he has the undivided support of United Democratic Party, including the Prime Minister.

When asked what he thinks about Tillett, Castro had some choice words that depicted a sense of dislike and disgust. 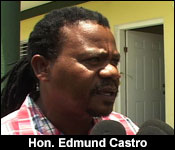 He was my CEO, I informed the PM, I told the PM he will not stay just like he didn’t stay with the next 2 guys. He will not stay, he’s not somebody that will stay nothing for too long.

He walked away from that, so he is basically a disgruntled person, want to throw his hat in the race. Lot of the people out here don’t know really know him. He born and partly grew up in Crooked Tree but he has left Crooked Tree for many, many years.”

The convention will be held on May 31st which will decide if Tillett was a formidable opponent.

Photos used in this article are courtesy of Channel 7.