Audrey Matura-Shepherd to be cited for contempt of court 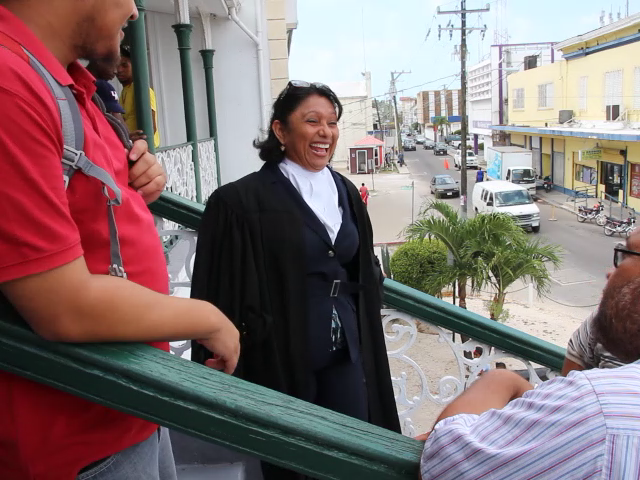 Wednesday, May 27th, 2015. Aaron Humes Reporting:  Earlier this year the agreement for mediation of the dispute between the Belize Grassroots Youth Empowerment Association (BGYEA) and the Government of Belize over the road reserve at Harmonyville on the George Price Highway was revealed near its completion by BGYEA’s attorney, Audrey Matura-Shepherd. Most of the issues had been worked out and only the matter of building of roads remained to be addressed as well as legal costs. However, the mediation process is closely guarded and the judge handling the case, Justice Courtney Abel, has moved to have the outspoken attorney cited for contempt of court for her premature revelations.

The case was scheduled for this morning but has been adjourned to July, as Matura-Shepherd is currently involved in a criminal trial and Justice Abel is out of the country. Matura-Shepherd declined comment to reporters at court today.

In October of 1999 when she was a Senator and editor of the Guardian newspaper, party organ of the United Democratic Party (UDP), the then-Audrey Matura Tillett wrote an article in the newspaper on the judicial system and was cited by then-Director of Public Prosecutions and now Supreme Court judge Adolph Lucas; however the case was defeated by several preliminary objections raised by Senior Counsel and now Prime Minister Dean Barrow, who was Matura’s defense attorney.

Previously Matura was handed a three-month suspended sentence for contempt of a Family Court proceeding.